Researchers from the University of Oslo in Norway have developed a shape-shifting four-legged robot that can change its limbs in response to its environment.

Led by Tønnes Nygaard, the new quadruped automaton can detect terrain changes by itself and extends or contracts its limb to adjust accordingly. Researchers submitted the details of this new shape-shifting four-legged robot in a report titled "Real-world embodied AI through a morphologically adaptive quadruped robot," appearing in the journal Nature Machine Intelligence, March 15. 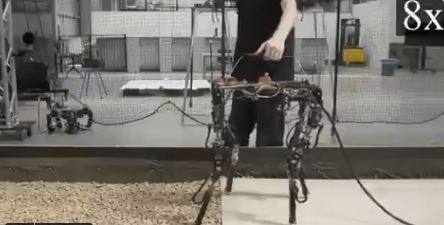 Researchers explain in their report that a fixed morphology traditionally binds robots during their operational lifetime. This means that they are designed with a fixed hardware and control structure, often designed and implemented in conjunction with their intended use.

In the shape-shifting four-legged robot from the University of Oslo team, they explain that the morphological adaptivity of the robot is rooted in an AI-driven solution that has two components: (1) a robot that allows for in situ morphological adaptation and (2) an adaptive algorithm that would allow the quadruped robot to transition between different energy-efficient morphologies depending on the terrain it detects.

To achieve this, researchers first built a model that describes how the robot morphology is related to its performance with respect to the terrain. They then tested the shape-shifting four-legged robot continuously in the laboratory, letting it walk through setups of concrete, sand, and gravel, then observed the behavior in each. This continuous training of the robot further allowed the researchers to model the relationship between the terrain and the energy required. They also tracked the changes in the length of the robot's "leg bones."

Afterward, researchers deployed the shape-shifting four-legged robot outdoors to further fine-tune its response time and observe its capability to respond based on changes in the environment.

Previous attempts to conceptualize a morphologically adaptive robot relied mainly on simulation and modeling. However, this work from the University of Oslo researchers based their efforts on hardware and real-world testing, leading them to say that this project is "guaranteed to work in reality."

Mobile robots have found extensive use in a wide range of applications from space exploration, military, industrial, and even for disaster response and rescue. So far, the quadrupedal robot - designs that employ four movable limbs - have been mostly preferred for practical use, especially when compared to wheeled and tracked robot. Its mobility and wider adaptability to terrain changes allow it to navigate similarly to humans and animals do.

In a December 2020 review of quadruped robots on the Ain Shams Engineering Journal (ASEJ), authors and engineers examined some of the most remarkable advancements in mobile robots that also use a quadrupedal design.

One of the most advanced and most intelligent quadruped robots available today is Spot, an agile, mobile robot developed by researchers from Boston Dynamics. Offering unprecedented mobility, Spot allows users to automate tasks like routine inspection tasks as the robot is fitted with cameras and sensors that eliminate the need for an actual person to survey or observe otherwise dangerous environments.