Astronauts onboard the International Space Station (ISS) undocked the Soyuz spacecraft from its Earth-facing port on Friday. They moved it to make room for another spaceship, which would arrive in April. 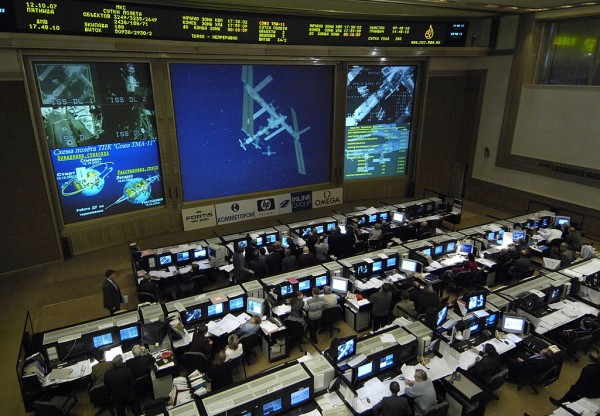 (Photo: Bill Ingalls/NASA via Getty Images)
KOROLEV, RUSSIA - OCTOBER 12: Live video from the Soyuz TMA-11 spacecraft of the International Space Station is shown on the screen at the Russian Mission Control Center on October 12, 2007, in Korolev, Russia. Expedition 16 Commander Peggy Whitson, Soyuz Commander, and Flight Engineer Yuri Malenchenko, and Malaysian Spaceflight Participant Sheikh Muszaphar Shukor docked their Soyuz TMA-11 spacecraft to the station at 10:50 a.m. EDT. The crew launched from the Baikonur Cosmodrome in Kazakhstan at sunset in October. 10 in their Soyuz TMA-11 spacecraft bound for a docking to the International Space Station on October 12. Whitson and Malenchenko will spend six months on the station, while Shukor will return to Earth on October 21 with two of the Expedition 15 crew members currently on the complex.

According to Roscosmos, cosmonaut Sergey Ryzhikov redocked the Soyuz MS-17 crewed vehicle from the Rassvet Mini-Research Module to the Poisk module of the Russian portion of the ISS to make room for another Soyuz spacecraft that will fly with three crew members next month.

Sergey Kug-Sverchkov and Kate Rubins were among the other crew members onboard the capsule during the evacuation maneuver. In October, the trio of astronauts flew from inside the spacecraft they were relocating.

According to SpaceFlightNow, this is the 19th Soyuz port relocation in the history of the International Space Station and the first since August 2019.

How Did Astronauts Relocate the Soyuz Spacecraft?

Slash Gear said the commander backed away the spacecraft from the docking module to a distance of about 130 feet. Ryzhikov went around the rear of the space station in a fly-through maneuver to get over the ISS.

Afterward, he manually docked the capsule with the Poisk module on the station's Russian segment's upper level. The docking took place at 1:12 p.m. EDT, and it took 34 minutes to complete.

The spacecraft flew at a speed of around five miles per second during the maneuver. The new crew members, however, were unable to dock with the Poisk module. Mission controllers wanted it to dock with the Rassvet module so that Poisk could be used for a planned spacewalk later this year.

The Exp 64 trio aboard the Soyuz MS-17 crew ship docked at 1:12pm ET switching ports from the Rassvet module to the Poisk module readying the station for the next crew arrival on April 9. More... https://t.co/SYWVzZNwK8 pic.twitter.com/ImWMlJPTY2

When Will the Soyuz MS-18 Land?

Space has been reserved for the ISS's scheduled arrival in April with three Expedition 65 crew members. On April 9, the spacecraft will transport two Russian cosmonauts, Oleg Novitsky and Pyotr Dubrov, and one NASA astronaut, Mark Vande Hei, to the International Space Station (ISS).

According to Digital Trends, the ISS would be incredibly busy with the three new astronauts' launch. That would make a total of 10 crew members on board as soon as they arrive. This won't last long as Rubins, Ryzhikov, and Kud-Sverchkov will board the same Soyuz MS-17 that took them to the ISS and that they only moved for their return to Earth on April 17.

"The relocation opens the Rassvet port for the arrival April 9 of another Soyuz, designated Soyuz MS-18, which will carry NASA's Mark Vande Hei and Roscosmos' Oleg Novitsky and Pyotr Dubrov to join the space station crew after launching from the Baikonur Cosmodrome in Kazakhstan," American space agency NASA said in a statement on Friday.