Maps have been used to mark territories and, more importantly, treasure. However, the new Map of Life marks locations where Earth's undiscovered species are most likely to be found.

A new scientific work combines geographic information to visualize the potential of nature in harboring still-undiscovered lifeforms here on Earth. According to their website, "Map of Life aims to support effective and global biodiversity education, monitoring, research, and decision-making by assembling and integrating a wide range of knowledge about species distributions and their dynamics over time."

In an effort to curb the ongoing biodiversity crisis - the rapid loss of species and degradation of ecosystems - the ongoing mapmaking effort, albeit speculative, might be the next best option before another huge extinction event comes our way. 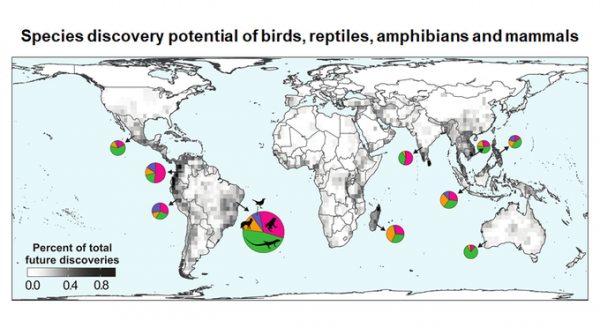 A Cross-Platform Biodiversity Knowledge Base

The Map of Life website contains a Discovery Potential that shows a world map and an option for a particular class of animals - birds, reptiles, mammals, and amphibians - and the potential for discovering new species. Additionally, it also offers a summary of species found in each particular country. For example, it mentions how Iceland has 87 species of birds, 29 mammals, 2 bumblebees, 251 plants, and one conifer within its boundaries. Users of the platform can also download the full list of species per territory, further organized based on their taxonomic group.

Developers of the site also offer a look at the species range map, habitat loss projections, and biodiversity trends.

This latest speculative cartography of undiscovered species is the latest in the Map of Life effort, a global database that tracks wildlife distribution across the planet. Mario Moura and Walter Jetz, researchers from the Department of Ecology and Evolutionary Biology at Yale University, are responsible for the new map of undiscovered species. They also released an accompanying report, titled "Shortfalls and opportunities in terrestrial vertebrate species discovery," appearing in the journal Nature Ecology & Evolution.

Understanding Factors in the Search for Undiscovered Species

In developing their map, researchers looked at 11 key factors to allow them to predict locations where undiscovered species might still be discovered. For example, larger animals found in larger geographical areas are likely to be discovered, making new discoveries for these species unlikely in the future.

According to the researchers, the odds of finding these undiscovered species vary depending on a number of factors. Location-wise, they believe that Brazil, Indonesia, Madagascar, and Colombia have the greatest opportunities for new discoveries. Additionally, the number of taxonomists working on these species and locations also affect the chances of finding a new species.

"We tend to discover the 'obvious' first and the 'obscure' later," Moura added, noting the need for more funding for taxonomists to accelerate the search for these species.

"A more even distribution of taxonomic resources can accelerate species discoveries and limit the number of 'forever unknown' extinctions," Jetz added.