While kangaroos have been the go-to examples of animals that hop, researchers report the discovery of an extinct relative supposedly good at climbing trees.

Australian researchers reported finding an extinct kangaroo species that once roamed the continent some 40,000 years ago. Its defining feature - climbing trees - were identified through strongly curved claws, hands capable of grasping, and strong forelimbs and hindlimbs. 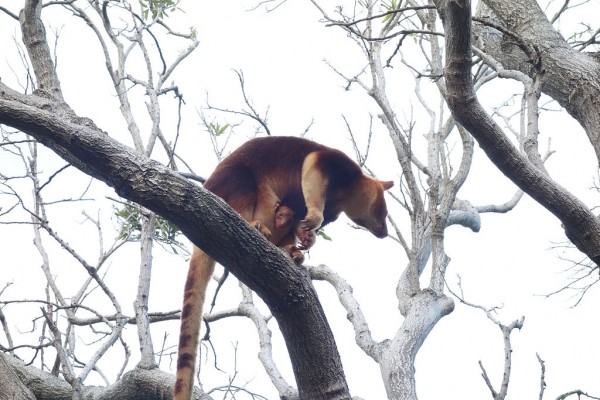 (Photo: Photo by Taronga Zoo via Getty Images)
SYDNEY, AUSTRALIA - MARCH 8: In this handout image provided by Taronga Zoo, an unnamed baby Goodfellows Tree Kangaroo joey is seen in it's mothers pouch on March 8, 2014, in Sydney, Australia. Taronga Zoo is celebrating the successful birth of its first Goodfellows Tree Kangaroo joey in more than 20 years. Zookeepers have only just begun seeing her peeking out from first-time mother, Qwikilas, pouch after she was born in September last year.

"The specimens we analyzed-including several cranial and two near-complete skeletons-suggests this kangaroo species would climb and 'move slowly' through trees," said Dr. Natalie Warburton, one of the authors of the study from the Harry Butler Research Institute in Murdoch University, in a statement.

Together with Professor Gavin Prideaux from the College of Science and Engineering in Flinders University, Dr. Warburton published their findings in the report "The skeleton of Congruus kitcheneri, a semiarboreal kangaroo from the Pleistocene of southern Australia," appearing in the latest Royal Society Open Science.

The specimens studied were found in the Nullarbor Plain Thylacoleo Caves and Mammoth Cave in the western part of Australia by cavers Paul Devine and Eve Taylor. The location has been a crucial point in understanding the incredible biodiversity that once existed in the Australian continent, thanks to the fossil remains discovered here - often in well-preserved conditions.

This is unexpected and exciting and it provides us with new information as we try to understand the changing environments of Australia through time," Warburton added.

Further describing the extinct kangaroo species, Warburton noted the discovered remains of the Congruus kitchener as having "unusually long fingers and toes, with long curved claws" compared to other macropodines - kangaroos and wallabies - designed for gripping. Additionally, these discovered kangaroo remains have powerful arm muscles most probably used to hoist themselves up the trees. These species also have longer and more mobile necks which, according to Warburton, are useful in "reaching out the head in different directions for browsing on leaves."

A Relative to Kangaroos and Wallabies

To arrive at these features of the Congruus kitchener, researchers had to go through the painstaking process of identifying and describing the details of each bone in the discovered remains. Their efforts reveal that the arboreal macropods belong to a now-extinct species of wallaby.

Wallabies are small to middle-sized macropods native to the Australian continent and New Guinea. It is generally similar to kangaroos, but with one distinct difference - the size.

The specimen in the study also revealed that the extinct species had "highly unusual pockets" near its nasal cavity wall - believed to have helped the species sniff out and browse for plant material otherwise inaccessible for ground-based animals.

Researchers note that the discovered extinct species resembles all groups of surviving macropods, despite these existing animals being mostly ground-based. However, there are still some arboreal species belonging to this family. One example is the golden-mantled tree kangaroo - a species native to the northern part of New Guinea and was first formally described in 1993 - which is unfortunately tagged in the IUCN Red List of Critically Endangered Species because of their rapidly declining population due to habitat destruction and other anthropogenic activities.

Check out more news and information on Extinct Animals in Science Times.