Experts predict that the solar storm which hit Earth on March 8, 1582, could happen again in the twenty-first century. 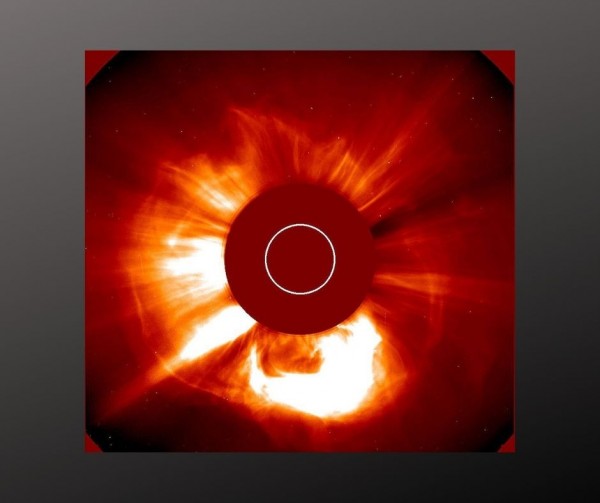 (Photo: Solar & Heliospheric Observatory/NASA via Getty Images)
IN SPACE - OCTOBER 28: In this handout from the Solar & Heliospheric Observatory, a major solar eruption is shown in progress on October 28, 2003. This X18 flare is the strongest flare since August 16, 1989, when an X20 flare occurred. A large coronal mass ejection (CME) has been hurled towards the Earth and could hit the Earth's magnetosphere by October 30. The CME is seen as a white circle around the sun in this image. Until the orientation of the magnetic field in this cloud is known, the severity of the Geomagnetic Storm will be unknown. If the cloud has a southward-directed magnetic field it will be severe, but if it has a northward component it will not affect the Earth that much. The eruption also accelerated a high-energy proton shower, which can cause damage to satellites and can be harmful to astronauts.

If the "great fire" that erupted in the sky over hundreds of cities across Europe and Asia in 1952 happens, it would cause billions of dollars in damage and knock out power grids all over the world.

Scientists at Cornell University discovered eyewitness reports of a three-day-long "fiery red show in the sky." The "fire rays [that] appeared over the castle [was] dreadful and fearful."

"The following day, it happened [at the same hour], but it was not so great and terrifying. Everybody went to the countryside to see this great sign," the chronicle said.

Researchers also recorded something comparable happened across feudal Japan. People in Kyoto saw a similar show of fiery red skies. This event has also been reported in Leipzig, Germany, South Korea, and several other European and East Asian countries.

According to NASA, solar flares and winds shoot out boiling hot plasma from the sun. These have an effect on Earth's magnetosphere, which causes bright auroras in areas where they aren't usually seen. Even though most solar storms aren't dangerous, a large one may cause significant electronic interference.

Why Learn More About a Solar Storm From Five Centuries Ago?

You may be wondering why scientists would read old accounts of a nearly five-hundred-year-old phenomenon. They dug them up to learn more about the phenomenon, and such events are important indicators of solar weather patterns.

Solar storms, also known as extreme space weather, occur when the sun releases boiling-hot plasma in the form of solar flares and winds.

While most solar storms are harmless, a big one striking Earth may have disastrous consequences.

According to Universe Today, the solar storm that struck in 1909 was one of the most powerful twentieth century.

It reached Earth on September 9, according to historical records, as a shock wave from the solar wind, which was later related to the ejection of plasma from an active sunspot.

It also caused telegraph communications in the mid-to-low latitudes to be interrupted.

Scientific American also reported about Quebec's power grid was knocked out by a "moderately high" storm.

Researchers said the study also mentions the 1859 Carrington incident, which is regarded as one of the most extreme space weather events ever documented.

In 1973, there was a more recent incident that may have resulted in casualties.

The solar storm struck Earth in August of that year during the Apollo period. Still, astronauts exploring the moon at the time had already returned home a few months before.

When more humans journey to space - specifically, as NASA plans a moon mission in 2024 - the team aims to use this data to create better prediction models.

RELATED ARTICLE: Giant Flare That Swept Through Solar System Came From Another Galaxy 11.4 Million Light-Years Away