In a parade fit for the royals, 22 royal Egyptian mummies emerged from their resting place last weekend to be relocated to a new high-tech facility, CNN reported.

Many Egyptians tuned in to "The Pharaoh's Golden Parade," the event organized by the Egyptian Ministry of Tourism and Antiquities. But as a health precaution because of the COVID-19 pandemic, officials urged people to stay off the streets which is why residents witnessed the event by watching their television.

Egyptian authorities shut down the roads along the Nile for the royal parade that is aimed to showcase the north African country's rich collection of antiquities to boost tourism that has stopped because of the pandemic. 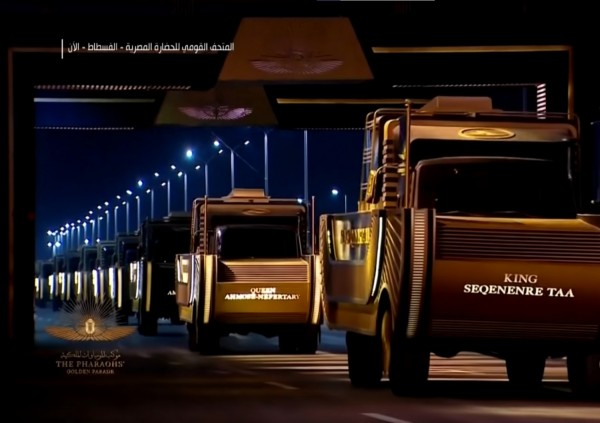 Myth on the "Curse of the Pharaohs" Not True

The Golden Parade transported 22 royal Egyptian mummies wherein 18 of them are kings and four were queens, from the Egyptian Museum in central Cairo's Tahrir Square to the high-tech facility of the National Museum of Egyptian Civilization in Fustat.

But this has ignited concerns, particularly in social media, that disturbing the tombs of the royals might have caused the recent incidents that happened in the country.

These incidents are the giant ship that blocked the Suez Canal for a week that was only freed on Monday, the train crash that killed dozens late last month, and the collapsed building in Cairo.

Even before British archaeologist Howard Carter opened Tutankhamun's tomb in 1922, there was a warning written on his tomb that read: "Death will come on quick wings for those who disturb the king's peace."

Soon after opening the tomb, his team succumbed to freak accidents and death that fueled the myth of the curse. But experts today said that the cause of their deaths is likely due to the dust and germs sealed in caverns.

Egyptian archaeologists Zahi Hawass dismissed the myth saying that the recent events are not caused by the planned relocation of the royal mummies. The myth could serve as a good element for movies, TV shows, or newspapers but there is no truth behind it.

"There's no curse at all," Hawass said.

ALSO READ: Mummified Remains of a Bejeweled Teenager Found Inside a 3,500-Year Old Coffin in Egypt

Process of Mummification in Ancient Egypt

The mummification process in ancient Egypt would take several days administered by special priests that are knowledgeable in the human anatomy that would perform rituals and prayers during the process.

Here is the step-by-step mummification process in ancient Egypt according to Smithsonian Magazine:

Experts said that the drying and embalming part of the mummification process is the key to preservation, which is at the heart of Egyptian culture.

Check out more news and information on Ancient Egypt and Mummy on Science Times.