On Tuesday, April 13, Japan announced that it will gradually release the Fukushima wastewater into the Pacific Ocean over the next decades, describing it as the best option to dispose of the treated wastewater despite fierce opposition from fishing crews and other countries.

According to The New York Times, the plan was approved during a cabinet meeting of ministers early that day. Public and safety concerns have delayed the approval, but the Japanese government said that the space to store the water is running out next year, and Prime Minister Yoshihide Suga said that the disposal of the wastewater is a problem that cannot be avoided.

He added that the government would "take every measure to absolutely guarantee the safety of the treated water and address misinformation," noting that the cabinet will meet again within the week to finalize the details on carrying out the plan. 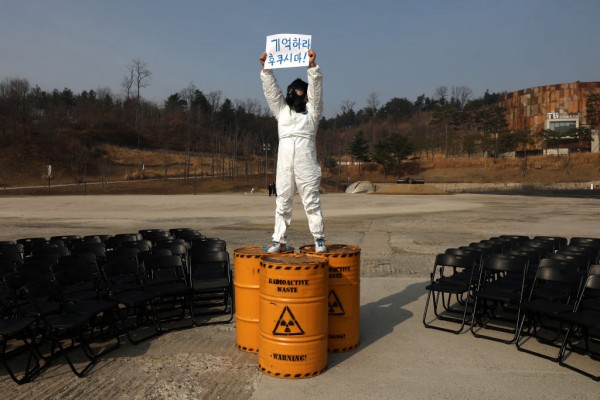 (Photo: Getty Images)
SEOUL, SOUTH KOREA - MARCH 11: A South Korean environmental activist wearing a gas mask holds up a sign reading "Remember Fukushima!" during an anti-nuclear protest to mark the 10th anniversary of Fukushima Daiichi nuclear disaster on March 11, 2021, in Seoul, South Korea. Protesters gathered on the day of the 10-year anniversary of the 2011 Tohoku earthquake and tsunami that caused the Fukushima disaster and called on the Japanese government to retract its plan to release water containing radioactive materials stored at the Fukushima nuclear power plant in Japan. (Photo by Chung Sung-Jun/Getty Images)

CNet reported that the Japanese government plans to dump over one million tons of treated wastewater from the ruined Fukushima Daiichi nuclear power plant into the Pacific Ocean for the next decades.

The wastewater had been steadily accumulating in storage tanks for a decade since the tsunami flooded the nuclear power plant in 2011. The Tokyo Electric Power Company that manages the plant said that the storage would soon run out next year, and the release of contaminated water is expected to begin in 2023.

In 2018, TEPCO spokesman for decommissioning and decontamination unit Kenji Abe told Roger Cheng of CNet that they are aware that they cannot store more and more wastewater as it would likely run out of space eventually.

The Japanese government's decision will not come as welcome news to fishermen in Fukushima, citing the possible "catastrophic impact" the disposal will do on the environment, Reuters reported.

The international environmental organization Greenpeace strongly condemns the decision to dispose of the treated wastewater in the Pacific Ocean.

They said that the decision "ignores human rights and international maritime law" and that the Japanese government has "opted for the cheapest option" to deal with radioactive waste.

How Safe Is Fukushima Wastewater?

Even before Japan's plan to release Fukushima wastewater to the Pacific Ocean has been finalized, it has met protests from different sectors, citing public and safety concerns.

However, the government argues that the treated wastewater is safe as it is processed to remove almost all traces of radioactive elements and has been diluted, BBC News reported.

The International Atomic Energy Agency backed Japan's plan for the treated wastewater plan. It is said that it is the same as the disposal of wastewater at other nuclear power plants around the world.

"Releasing into the ocean is done elsewhere. It's not something new. There is no scandal here," IAEA Director General Rafael Mariano Grossi said.

Scientists said that the elements left in the wastewater would only pose harm to humans if taken in large doses. But diluted wastewater has o scientific detectable risk of harmful elements. They noted that the radioactive tritium element has a half-life of 12 years to disappear after decades and not centuries.

They also pointed out that the risk of tritium being ingested by fishes or sea creatures that the fishing industry groups are concerned about has a low risk of happening and does not pose a threat to human health.

Check out more news and information on Fukushima Nuclear Plant in Science Times.