A new theory addresses the "three-body problem," a centuries-old problem in physics and classical mechanics that predicts the motion of three gravitating bodies in space consistent with Newton's laws of motion and universal gravitation.

The new study, led by Professor Barak Kol from the Racah Institute of Physics at the Hebrew University of Jerusalem, presents a novel and exact reduction of the old motion problem. This new theory builds on reexamining basic concepts that served as the basis for other theories.

They present their findings in the article "Flux-based statistical prediction of three-body outcomes," appearing in the journal Celestial Mechanics and Dynamical Astronomy. 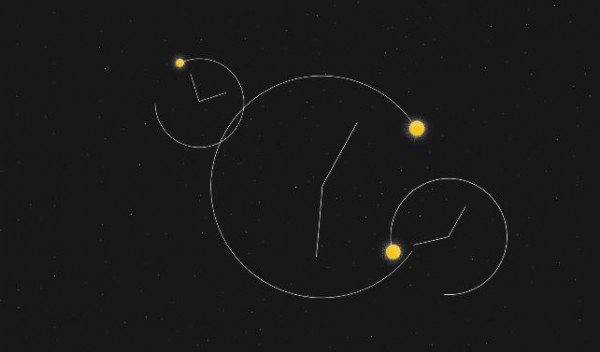 History of the Three-Body Problem

Near the end of the 17th century, Newton's law on universal gravitation very much explained the movement of the planets around the sun. He then attempted to explain the movement of the moon next. But since the earth and the sun exert gravitational forces on the moon, it led Newton to inquire and postulate the three-body problem.

This physics inquiry soon showed itself to be easy to define, yet difficult to solve. As Newton established universal gravitation that solved two-body problems, he was not able to do the same with the three-body problem.

Other mathematicians also attempted to work on the problem - Euler, Lagrange, Jacobi - before Henri Poincare in the late 19th century found out that the problem is extremely dependent on the initial conditions of the body, such as position and velocity. This dependence was later known as chaos, which in itself has wide implications. The most significant of which was that the three-body problem has no deterministic solution in its closed form.

With the establishment of other branches of physics, the problem later came to used in a wider sense that involves the interaction of three bodies bound by mutually acting forces.

In quantum mechanics, for example, an analogous problem is the helium atom - whose nucleus and pair of electrons interact following the inverse-square Coulomb interaction - and like the classical three-body problem, remains yet to be solved exactly.

New Step in the Right Direction

Because of the problem's chaotic nature, not only is there no closed-form deterministic solution possible, computer simulations would not be capable of providing specific, accurate, and reliable predictions to solving the problem. However, large data sets from simulations led to the possibility of looking at a statistical prediction of the system. Whereas a deterministic solution is not the way to go, researchers have since turned to a statistical one.

The new theory was set into motion when Dr. Nicholas Stone, also from Racah, tested a new calculation method that revealed the first-ever closed mathematical expression leading to a statistical solution. However, these computations are based on assumptions yet still inspired Barak Kol to re-examine the assumptions that gave rise to the closed-form expression that could potentially solve the centuries-old physics problem.

To work around the problem of the infinite phase-space volume, which suggests the existence of infinite probabilities from the infinitely unbounded range of the gravitational force of the three bodies, previous attempts - as well as the recent one - focused on an arbitrary and finite "strong interaction region."

The flux-focused theory was able to predict the escape probabilities of each of the three bodies, but only under certain assumptions. However, Kol noted that "tests by millions of computer simulations show strong agreement between theory and simulation." To test this theory, he collaborated with various partners - Viraj Manwadkar from the University of Chicago in the US, Nathan Leigh from the University of Conception in Chile, and Alessandro Trani from the Okinawa Institute in Japan - to run simulations on the new theory.

RELATED ARTICLE: Space-Time Anomalies (or Wormholes) Might Exist For Real, According to Physicists