From April 14 to April 17, the TFR limits airspace movement above Blue Origin's test facility in Van Horn, Texas. The agency issued an "alert to airmen" on Sunday to "provide a secure atmosphere for rocket launch and recovery." However, it doesn't mention Blue Origin by name. 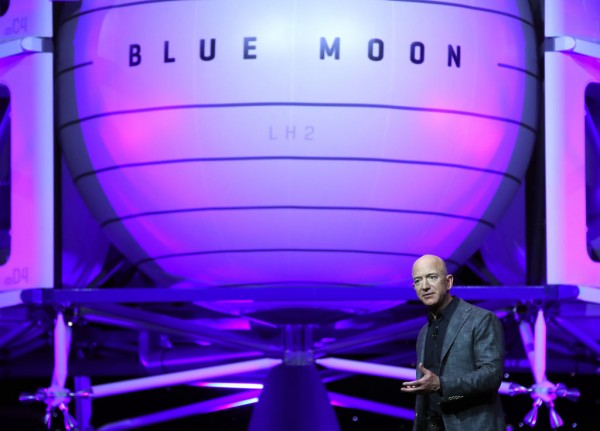 (Photo: Mark Wilson/Getty Images)
WASHINGTON, DC - MAY 09: Jeff Bezos, the owner of Blue Origin, introduces a new lunar landing module called Blue Moon during an event at the Washington Convention Center, May 9, 2019, in Washington, DC. Bezos said the module will be used to land humans on the moon once again.

The tourist version of Blue Origin will compete with Virgin Galactic, established by Sir Richard Branson.

What Will Happen to Blue Origin's Rehearsal?

Blue Origin representatives wrote in a mission description that they would conduct astronaut functional exercises to prepare human spaceflight.

"The primary operations will entail Blue Origin personnel standing in as astronauts entering into the capsule prior to launch," they added. "These astronauts will climb the launch tower, get into their seats, buckle their harnesses, and conduct a communications check from their seat with CAPCOM, the Capsule Communicator."

TechCrunch said only one passenger will be on board during the actual flight. Mannequin Skywalker, Blue Origin's test dummy, would collect data on how people will respond to the launch. The figure has flown before, but this is the first time it is acting as a human spaceflight relay, with the simulation team performing the mission's ground operations rehearsals.

What is New Shepard?

New Shepard is a reusable booster-capsule device that will be used to transport research crews and payloads, as well as space visitors, to altitudes just above the Earth's atmosphere.

Since 2015, Blue Origin has been evaluating New Shepard and has flown over a dozen versions of the spacecraft. Unlike Elon Musk's SpaceX, which is notorious for moving quickly and breaking stuff when testing new rockets, Bezos' space company is taking its time.

CNBC stated at the time that the company hoped to fly the first crewed flight in early April. According to the most recent timelines, the company plans to start flying people on board the rocket later this year. Blue Origin's website still has NS-15 and live videos of its astronaut rehearsal procedures, too.

The company's launch is scheduled for 8 a.m. CDT (9 a.m. EDT/6 a.m. PDT) this week, and it will take place from the company's launch site in West Texas. A live stream will begin an hour before the launch window opens. Blue Origin plans to include footage of astronaut rehearsal activities, which will be the best look yet at what the tourist flights could look like.