Despite microbiologist warnings since the last decade, people are still dependent on antibiotics. Doctors prescribe such for illnesses that aren't even bacterial and people just take it on the fly with just the onset of fever.

Such antibiotic misuse and overuse would lead to the rise of bacterial species that are resistant to the favorite antibiotics we regularly take. These antibiotic-resistant bacteria, called "superbugs" need forceful monitoring to fight off, and scientists are rushing to develop new drugs and treatments that can waylay them.

In a study from the Royal Melbourne Institute of Technology (RMIT) University in Vietnam, researchers have developed groundbreaking nanotech coating that can combat resistant strains of fungal and bacterial infection, thus ensuring healthy human cells.

The researchers said their new material can be used on implants and wound dressings to defend against infection, and it could self-degrade without having to remove the coating, as reported by IFLS. 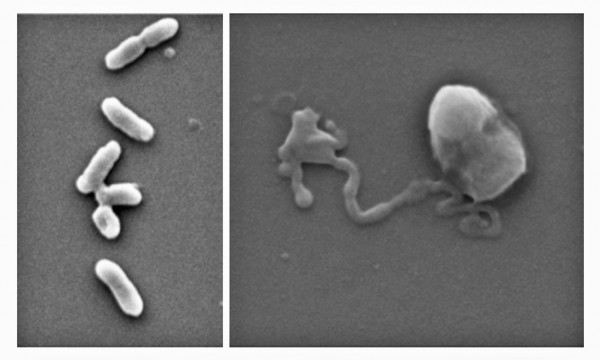 (Photo: RMIT)
E.coli bacteria before exposure to the nanothin antimicrobial coating (left) and after (right)..

This innovation can help hospitals fend off resistant infections, without developing new strains in the process.

The researchers' findings were published in the Biological and Medical Applications of Materials and Interfaces, titled, "Broad-Spectrum Solvent-free Layered Black Phosphorus as a Rapid Action Antimicrobial."

In a statement, co-lead researcher Dr. Aaron Elbourne, a Postdoctoral Fellow in the RMIT School of Science said: "We need smart new weapons for the war on superbugs, which don't contribute to the problem of antimicrobial resistance."

"Our nanothin coating is a dual bug killer that works by tearing bacteria and fungal cells apart, something microbes will struggle to adapt to. It would take millions of years to naturally evolve new defenses to such a lethal physical attack."

Coating Made of Nanothin Black Phosphorous

This nanotech layer is composed of a layers of the wafer-thin black phosphorous, a stable phosphorous allotrope that has been proven to have antibiotic properties. But using black phosphorous is not easy - it would break down when it encounters oxygen. When it breaks down, it creates a reactive oxygen species (ROS), which will be effective in neutralizing bacteria.

When a bacterial cell gets in contact with ROS, its electrons are torn from the molecules in the cellular structures of the bacteria, thus affecting its protective shell thus tearing the bacteria apart. Such a process is called cellular oxidation, which is fast becoming an effective method of killing bacteria.

Researchers showed how black phosphorous can be made into a thin layer that neutralizes resistant infections and this includes the popular MRSA strain. In just about two hours, this layer eliminated 99 percent of all fungal and bacterial cells, with full degradation in 24 hours.

This nanotech-based solution is promising, but it remains a pure proof-of-concept, as refinements and clinical trials before its eventual rollout to patients. The exact amounts of black phosphorous required for the solution remain uncertain.

And the use of large-scale nanothin material production is relatively new. Despite this, researchers aim to push their work further and find opportunities to finally set its place as a key solution to combat antibiotic-resistant bacteria.