Duke University biomedical engineers built a self-assembling nanomaterial that can limit the damage of inflammatory diseases through the activation of important cells in the immune system.

A nanofiber-crafted drug has been proven to effectively alleviate damaging inflammation similar to high-end treatments in studies with mouse models.

Key characteristics of inflammatory illnesses such as Crohn's disease, psoriasis, rheumatoid arthritis is the excessive presence of signaling proteins called cytokines, which trigger the inflammation. One of the most important inflammatory cytokines is called TNF. At present, the best cure for these diseases would be using manufactured antibodies named monoclonal antibodies, which are positioned to neutralize and destroy TNF and decrease inflammation.

While monoclonal antibodies have led to better therapies for inflammatory diseases, the treatment has its hitches, including its high cost and having patients inject by themselves. Most importantly, these drugs have inconsistent efficacy as they may or may not work at all given that the body produces antibodies to counteract the manufactured treatment. 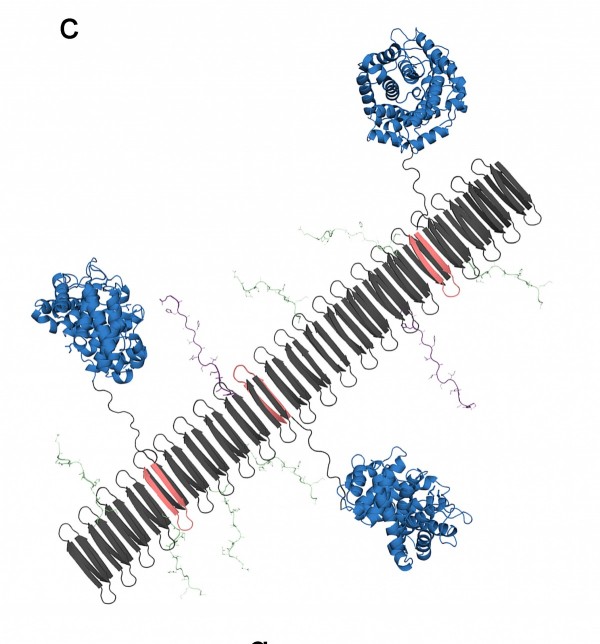 To avoid this, researchers are looking at how immunotherapies could help instruct the immune system on generating antibodies that would reduce inflammation.

"We're essentially looking for ways to use nanomaterials to induce the body's immune system to become an anti-inflammatory antibody factory," co-author Joel Collier, a professor of biomedical engineering at Duke University, said in the study. "If these therapies are successful, patients need fewer doses of the therapy, which would ideally improve patient compliance and tolerance. It would be a whole new way of treating inflammatory disease."

In the study, "Modular complement assemblies for mitigating inflammatory conditions," published in the Proceedings of the National Academy of Sciences, the researchers described how novel nanomaterials could assemble into long nanofibers that would have the wonder protein C3dg. These fibers would then activate immune system B-cells to create antibodies.

C3dg is a protein normally found in the body that helps the innate immune system communicate with the adaptive immune system, thus initiating specific white blood cells and antibodies to remove damaged cells and obliterate antigens.

With the protein being able to interface between cells in the immune system and enable the creation of antibodies without bringing about inflammation, researchers have been studying how C3dg can be utilized as an adjuvant in a vaccine-a protein that can help strengthen the immune response to the targeted pathogen.

When the researchers assembled the C3dg protein and important portions of the TNF into nanofibers, there was a strong B-cell response, and this means the production of antibodies that targeted TNF increased. In their mouse models of inflammation, the mice would have their internal temperature drop. But with C3dg nanofibers, it became highly protective, and the mice would not have an inflammatory response.

When they tried the nanomaterial with the mouse with psoriasis, they discovered that the nanofibers having C3dg were as potent and effective as monoclonal antibody therapy. As C3dg is normally seen in the body, anti-drug antibodies did not flush it out of the system.

The researchers then made a surprising discovery after studying the psoriasis model-C3dg was not merely stimulating antibody generation in B-cells, it was also inducing the response of T-cells.

Because of this, the team hopes to study the mechanisms behind the triggering of T-cells, The team also is planning further studies on exploring the nanomaterial response to models of rheumatoid arthritis.

RELATED ARTICLE: Nanotechnology to Fight Against Coronavirus: A Review of Techs and Studies Against COVID-19

Check out more news and information on Nanotechnology on Science Times