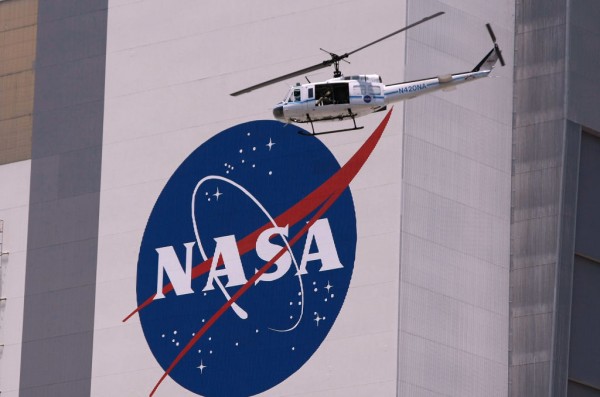 (Photo : Joe Raedle /Getty Images)
CAPE CANAVERAL, FL - MAY 31: A helicopter provides security for the NASA astronauts as they are driven in in their AstroVan to the space shuttle Discovery on launch pad 39A at the Kennedy Space Center as they prepare for lift off May 31, 2008 in Cape Canaveral, Florida. The Space Shuttle will be carrying the main unit of Japan's Kibo science lab to the International Space Station.

If all goes according to schedule, Spectrum News said SpaceX's Crew Dragon spacecraft would dock with the orbiting lab on Apr. 23 at 5:30 a.m. EDT (0930 GMT).

One thing engineers need to sort out is a potential oxygen loading problem. Still, SpaceX and NASA said they were good to go.

The four-person crew will launch from Kennedy Space Center's Launch Pad 39-A in a Dragon Crew capsule atop a SpaceX Falcon 9 rocket.

This is SpaceX's third overall crew launch as part of the Commercial Crew Program and the second routine rotation launch to the ISS.

This launch is also notable for being the first to have two foreign partners on board. Onboard a SpaceX spacecraft, astronauts from the European Space Agency and the Japan Aerospace Exploration Agency will make their first launches.

In the coming days, the Falcon 9 rocket will be rolled out to the launch pad, with a static test fire scheduled for Saturday.

Crew-2 will arrive at Kennedy Space Center from Houston on Friday. Shane Kimbrough and Megan McArthur of NASA, Akihiko Hoshide of JAXA, and Thomas Pesquet of the European Space Agency make up the team.

According to Space.com, NASA held a flight readiness analysis media teleconference on Apr. 15, with many primary stakeholders for the launch at KSC at 6 p.m. EDT (2200 GMT).

The Crew-2 astronauts will arrive at KSC on Apr. 16 at 1 p.m. EDT (1700 GMT). They will be welcomed safely, according to strict quarantine procedures.

The entire Crew-2 crew will participate in a virtual crew media interaction at KSC on Apr. 17, at 9:45 a.m. EDT (1345 GMT). Media are expected to submit the questions over the phone.

Another science media teleconference will take place on Apr. 19 at 1 p.m. EDT (1700 GMT) to discuss the mission's investigations and the launch of new solar arrays.

On Apr. 20, a prelaunch news conference will be held at KSC no earlier than one hour after NASA completes the launch readiness review.

The International Space Station will host a welcoming ceremony on Apr. 23.

NASA will stream those major events live on its social media feeds and watch on NASA TV, the NASA App, and its website. Due to the coronavirus pandemic, most KSC press and public facilities are closed, and only a limited number of media will be present.