The launch of Russia's Soyuz MS-18 spacecraft to the International Space Station on Friday coincides with the 60th anniversary of the first human-crewed space flight by Russian cosmonaut Yuri Gagarin, and the 40th anniversary of NASA's space shuttle.

The launchpad is named after the Vostok, the craft that launched Gagarin (1934-1968) into orbit on April 12, 1961, and the Soyuz MS-18 is decorated with a commemorative badge depicting the first cosmonaut. 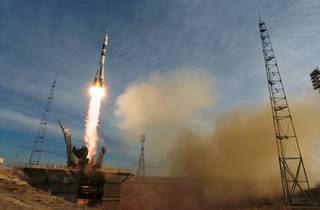 (Photo: NASA)
NASA requested the development of new spacecraft from Russia to transport astronauts to from the International Space Station

Space.com said one NASA astronaut, Mark Vande Hei, and two Russian cosmonauts, Oleg Novitskiy and Pyotr Dubrov, will travel from the Baikonur Cosmodrome in Kazakhstan aboard a Russian Soyuz 2 rocket, dubbed Soyuz MS-18 for Roscosmos and Expedition 65 for NASA.

Still, NASA expedited Vande Hei's appointment after the agency's attempts to transition to commercial crew opportunities were hampered by continuing technological problems with Boeing's Starliner astronaut taxi, which might push the vehicle's first crewed flight to 2022.

In an exclusive interview with Space.com, Vande Hei revealed that he was aware of the flight before its public launch.

"Me preparing for this flight was something we had done as a contingency, just in case we could get the seat," he said.

NASA usually purchases seats on the Soyuz. However, in this situation, NASA and Roscosmos, Russia's federal space agency, decided to swap seats - Vande Hei's on the Soyuz with an unnamed Roscosmos astronaut on a possible commercial crew mission. Since NASA is still ironing out the kinks in commercial crew schedules, Vande Hei may spend a year in space rather than the usual six months.

"Things change and ... we have to coordinate with the Russians, Roscosmos in particular, to figure out when to come back," Vande Hei told Space.com.

His previous space mission lasted six months. If Vande Hei is assigned to stay aloft for a year, he says he'll be looking forward to a new "life experience."

The three-person Soyuz MS-18 crew will be joined on the orbital station by seven Expedition 64 spaceflyers, allowing one of the largest crews in recent memory.

This year, the seven people who had already returned arrived in two spaceships. In October, NASA astronaut Kate Rubins and cosmonauts Sergey Ryzhikov and Sergey Kud-Sverchkov arrived at the station on a Soyuz spacecraft. NASA astronauts Michael Hopkins, Victor Glover, Shannon Walker, and Japanese astronaut Soichi Noguchi launched from the orbital complex on a SpaceX Crew Dragon in November.

How to Watch the Flight

The trio's spacecraft will dock with the space station at 7:07 a.m. EDT if everything goes according to schedule. Coverage of the event will start at 6:15 a.m. EDT. The hatch opening and crew or flight controller comments, which are due to occur at 8:30 a.m. EDT, will also be on the webcast.