The technique is called the time-travel rephotography that simulates time travel using the modern camera to recreate pictures of historical figures by factoring in how skin reacts to light, which old cameras were unable to capture, MailOnline reported. 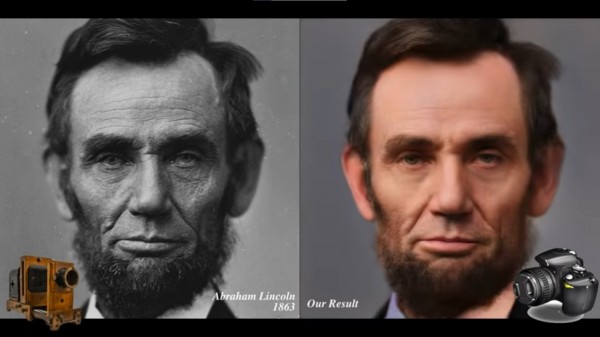 According to Gizmodo, fil stocks from a century ago were limited to capturing details in black and white and capturing a limited band of the color spectrum that results in incorrect representations of even famous people.

Abraham Lincoln's famous black and white photographs are deemed dirty, noisy, and feature the shallow depth of field that only focuses on some parts of his portrait. This was the result of low-quality cameras at that time.

Most black and white film stocks before 1907were orthochromatic or those that were sensitive to all visible light except for warm colors like red.

Light bounces when it hits the human skin, although some of it could penetrate the surface and illuminate the skin from within, making wrinkles and other physical features less obvious.

However, the effects of subsurface scattering are not captured by the orthochromatic film stock, making old photographs of Lincoln appear old in black and white.

Experts have tried colorization techniques before, but they failed to consider what was happening with old film stocks. They may de-noise, enhance, sharpen and color old black and white photographs, but these photos do not reintroduce natural softening effects of light in the skin that was not captured by old cameras.

ALSO READ: Deepfake Technology Animates Faces in Photos to "Bring the Dead Back to Life"

The new photo colorizing tool, called time-travel rephotography, was developed by scientists from the University of Washington, University of Berkeley, and Google Research.

These antique photos depict a faded monochromatic world because of the limited capacity of old cameras. But the new photo colorizing tool effectively goes back to time and makes up for the poor image quality with the help of AI. Hence, the name of time-travel rephotography.

MailOnline reported that researchers used NVIDIA's StyleGen2 AI system trained with modern digital portraits that they dubbed as sibling images that correspond to a historical figure due to their fairly similar appearance.

Then the researchers projected the antique photos on the space of the modern images using the AI system to create the ultra-lifelike modern photographs of the historical figures.

Study author Xuan Luo from the University of Washington said that they could create an interesting by-product of the photo colorizing tool by "morphing the "modern" sibling to the output for the "historical" figures."

They also admitted that the technology could introduce slight changes to the image, like altering the precise shape of a facial feature. But ultimately, the product bears strikingly realistic and recognizable images of famous historical figures.