Lyrid Meteor Shower Peak 2021: Here’s When, Where and How to Watch the Show!

The meteor season has returned with the annual Lyrid meteor shower 2021, peaking on Wednesday, April 21 and Thursday, April 22. To view the meteor shower, you may need to look up to a dark sky at specific times to capture than the mesmerizing moment.

What is the Lyrid Meteor Shower?

The Lyrid meteor shower is an annual, medium-strength spectacle caused by the Earth busting through a trail of debris and dust that were left in the Solar System by the C/1861 G1 Thatcher comet, a long period comet circling around the Sun every 415 years. It won't be back in the Solar System until the year 2283.

Stargazers are set to spot around 18 shooting stars an hour, each one traversing the sky at 30 miles/48km per second. But the real eye-catching feature of this meteor shower is not the number of shooting stars, but their intensity, which would emit apparent "fireballs."

Seen as extremely bright meteors as bright as the planet Venus, the Lyrids are known for emitting fireballs. Thus, it's certainly worth the painstaking watch. 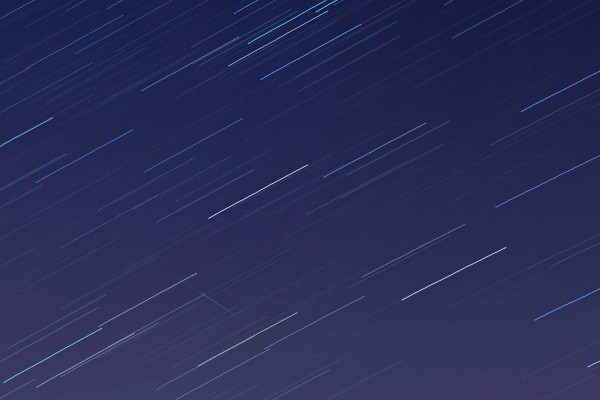 (Photo: Getty Images)
LONDON, ENGLAND - APRIL 21: (EDITORS NOTE: Multiple exposures were combined in camera to produce this image.) A meteor crosses the sky illuminated under the stars on a clear night on April 21, 2020, in London, England. The clear skies created by the New Moon coincide with the Lyrid meteor shower, an annual display caused by the Earth passing through a cloud of debris from a comet called C/186 Thatcher.

Viewing conditions are expectedly not perfect, as the Moon would be 70 percent illuminated, and would brighten the sky during that time. But it won't definitely drown down the Lyrid fireballs smashing the Earth's upper atmosphere.

After the Geminids in December and Quadrantids in January, there was a long interlude before the next Lyrid show, which happens yearly between April 16 and 30.

The peak night is expected on April 21, Wednesday, and April 22, Thursday, however, the Lyrids manage to produce a startling array of shooting stars for three nights. Thus, it's ideal to look skyward starting on the night of Tuesday, April 20 to Friday, April 23.

From midnight to near dawn is when the night is at its darkest, and the chances of seeing the shooting stars are very high.

Step Out and Gaze From Midnight to Near Dawn

As such, step out to stargaze when it is really dark, which is around midnight, and you could see a shooting star illuminating the dark sky. Besides, the best opportunity to witness these "shooting stars" is near the break of dawn, around an hour before it, when the Moon sets in the west.

The weather conditions for this year's Lyrid meteor shower are not perfect, but for those who want to watch fireballs in the night sky, and have clear skies above, you may be fortunate to witness this awesome meteor shower.

RELATED ARTICLE: Astronomy 2021: Your Guide to The Full Moons, Eclipses and Meteor Showers This Year!

Check out more news and information on Meteor Showers and Astronomy on Science Times.