SpaceX Astronaut Couple Shares Details About Life On and Off ISS

Megan McArthur is due to launch next Thursday from Florida's Kennedy Space Center aboard a 21-story SpaceX Falcon 9 rocket. It's an incredible achievement with which her family is already familiar with.

She'll be ferrying herself and three other astronauts to the International Space Station (ISS) for a six-month science mission as the pilot of the Crew Dragon capsule.

There are many dangers involved with blasting off on top of a giant Roman candle with 1.7 million pounds of thrust under you. Not to mention, you need to go six months without showers on the International Space Station! But her partner, fellow astronaut Bob Behnken, who will be at home in Houston with their 6-year-old son Theo, may have a more challenging career.

What Happens to a Kid When Astronaut Parents are Away?

McArthur said that being assigned to the Endeavour is "a neat surprise" and "a fun twist" on the entire thing. After the last Space Shuttle, Behnken and Doug Hurley called Crew-2, SpaceX's second routine astronaut mission, Endeavour. 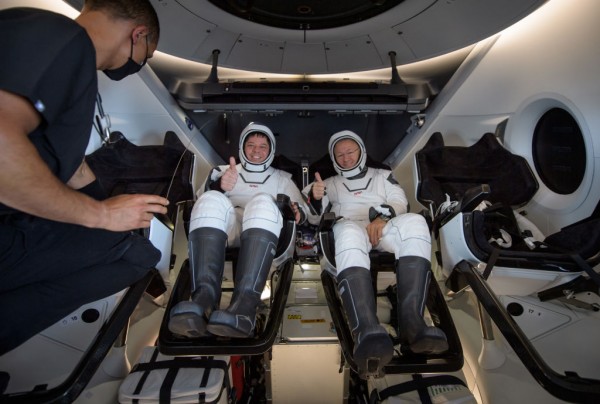 (Photo: Bill Ingalls/NASA via Getty Images)
GULF OF MEXICO - AUGUST 2: In this handout image provided by NASA, NASA astronauts Robert Behnken (L) and Douglas Hurley are seen inside the SpaceX Crew Dragon capsule spacecraft which landed in the Gulf of Mexico after completing the Demo-2 mission to the International Space Station on August 2, 2020, off the coast of Pensacola, Florida. The Demo-2 mission is the first launch with astronauts of the SpaceX Crew Dragon spacecraft and Falcon 9 rocket to the International Space Station as part of the agency's Commercial Crew Program.

"I'm going to launch in the same seat. So that is kind of a fun thing that we can share, you know, I can tease [Behnken] and say, 'Hey, Can you hand over the keys? I'm ready now to go," McArthur said.

McArthur has previously traveled to space to assist with the restoration of the Hubble Space Telescope. Still, he has never visited the space station. She expressed her enthusiasm for the mission, saying she is "super happy."

"At first, he was trepidatious about it and said, 'Hey I don't want you to launch on a rocket,'" Behnken recently told People. But after he saw one, Behnken said Theo was fine with him going first and then mommy, as long as the kid got to go after mom.

The biggest obstacle in the short term, according to McArthur, is being apart.

"Like any child facing a parent being gone for six months, he's not super excited about it," she said.

What Happens When Your Partner is 250 Miles Above the Surface of the Earth?

When it came time for Behnken to say his goodbyes before his launch, he was picked up by NASA TV microphones.

"Be good for mom. Make her life easy," he tells Theo.

But, as McArthur points out, it's not easy to watch your partner launch into space.

"One of the hardest things to do is watch the person that you love to launch into space," she told The Washington Post before the liftoff.

To make matters worse, it wasn't known how long Behnken and Hurley would last on the space station at the moment. They could have stayed in space for up to three months, but they could have left sooner. It was contingent on NASA's timeline and the performance of the Crew Dragon's solar panels in orbit.

McArthur admitted that one of the biggest challenges was figuring out when Behnken is coming home. Meghan and Theo could always see Behnken swimming about on the ISS when he was in orbit, thanks to NASA TV.

They called him every day from their Houston home, which needed cross-time zone coordination. Behnken used to chat before going to bed, which was at the end of the school day.

When McArthur gets in, she generally lays her bags down and prepares dinner. Finding the right time to truly communicate and interact with one another is part of the challenge.

They even attempted video chatting but discovered that Theo couldn't stay focused for an hour. As a result, she said, they'll limit video visits to 15 or 20 minutes for McArthur's mission.

Although Behnken was still in orbit, McArthur started preparing for her own flight. She was reliant on a babysitter. Finally, three months after leaving the world, her husband splashed down in the Gulf of Mexico. McArthur had to start traveling for her own training at that point.

The family had been used to the preparation routine by that time. Before his mission, Behnken had worked for five years on the Commercial Crew Program, which saw NASA finance the construction of SpaceX's astronaut-launch system. Intensive preparation was needed in the final two years, and he spent several days per week in California.

Then it was mom's turn to follow a similar plan for the last eight months. Her stay on the International Space Station will be much longer than Behnken's.

Megan being gone for six months, according to Behnken, will be a once-in-a-lifetime experience for him. He went on to say that they hadn't been apart for that long.

RELATED ARTICLE: Living on the Moon and Mars: Challenges That Humans Might Face