Found to be a 2019 Tesla Model S vehicle, the car crashed into a tree in the Carlton Woods subdivision, just north of Houston. Constable Mark Herman from Harris County Precinct 4 reported that a victim was found still in the front passenger seat while the other was in the rear seat, as reported by The Wall Street Journal.

The accident was believed to have been caused by high-speed driving and the electric car failing to navigate a turn, with the position of the victims and physical evidence gathered strongly supporting the possibility that "no one" was driving at the time of the incident.

"Our preliminary investigation is determining-but it's not complete yet-that there was no one at the wheel of that vehicle," Constable Herman said, adding that they're "almost 99.9% sure."

The Harris County Precinct reported coordinating with yet-unnamed federal authorities and that it was still unsure whether the Tesla Model S car's Autopilot feature was engaged. Emergency responders used 32,000 gallons of water to extinguish the flames that burned for about four hours. 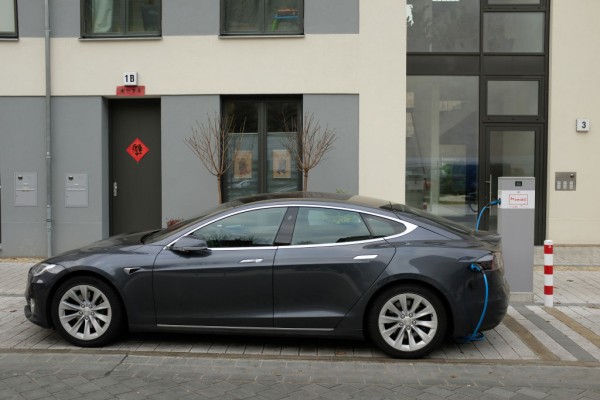 (Photo: Photo by Sean Gallup/Getty Images)
BERLIN, GERMANY - MARCH 02: A Tesla Model S electric car charges at a public charging column on March 2, 2019, in Berlin, Germany. Tesla recently announced it is closing many of its car showrooms in an effort to bring down costs as well as the price of its new Model 3.

According to the US National Transportation Safety Board, one of the risks of electric cars - like those manufactured by Tesla - are high-voltage lithium-ion batteries, which can reignite spontaneously after suffering damage. This occurs even after firefighters have extinguished the fire.

Back in March 2018, a Tesla Model X car crashed toward a roadside barrier and caught fire, leading to the death of its 38-year-old driver. Tesla soon responded to the accident with a statement, stating that their "hearts are with the family and friends who have been affected by this tragedy." The statement confirmed that the Model X autopilot was engaged, with its adaptive cruise control follow distance being set to the minimum.

Additionally, Tesla noted that the driver "received several visual and one audible hands-on warning," with the onboard system not detecting the driver's hands on the wheel, six seconds before the impact happened.

Tesla also explains that the 2018 crash took a fatal turn because of the crash attenuator, in this case, the highway safety barrier, was already damaged in a previous incident "without being replaced," with the electric car manufacturer noting that they have not seen the level of damage in a Model X in any other reported crashes.

It remains to be known whether similar circumstances led to the latest Tesla Model S crash in Texas. Tesla has not yet released a statement on the incident as of press time.

In the Tesla support webpage, the Elon Musk automotive company explains that as of April 2019, all new Tesla cars are equipped with the Autopilot feature, which includes Traffic-Aware Cruise Control and Autosteer capabilities.

Additionally, it includes a disclaimer on the limitations of its Autopilot, which includes poor visibility (heavy rain, fog, snow, etc), bright light from oncoming headlights or natural bright light like the sun, the presence of mud, ice, or snow, or obstruction due to additional mounted items or stickers and decals put on the car. Tesla recommends the regular cleaning of its cameras and sensors to help ensure its accurate and reliable performance.

Check out more news and information on Tesla in Science Times.