Freshwater Salt Pollution: Is It Threatening People and Wildlife?

Salts that de-ice highways, parking lots, and sidewalks keep people safe during winter. However, recent research indicates that they lead to a severe and rapidly growing issue for freshwater plants and animals in the United States. In the last 25 years, at least a third of the country's rivers and streams have become saltier.

By 2100, more than half of them will contain at least 50% more salt than they did previously. Increasing salinity would have an impact not only on freshwater plants and animals but also on human lives, especially in terms of drinking water. 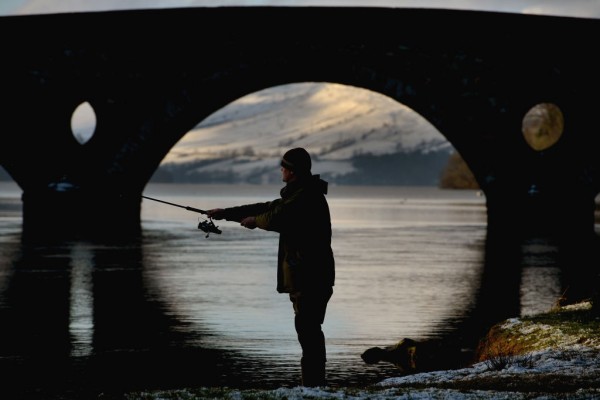 (Photo: Jeff J Mitchell/Getty Images)
KENMORE, UNITED KINGDOM - JANUARY 15: An angler casts during the opening of the salmon fishing season on the River Tay January 15, 2013 in Kenmore, Scotland. A procession with a pipe band and anglers made its way through Kenmore at the east end of Loch Tay to mark the start of the 2012 salmon season on the River Tay.

Sujay Kaushal, a biogeochemist at the University of Maryland, College Park, claimed that de-icing salts are a part of the problem, steadily corroding our infrastructure. A journal titled "Regulations Are Needed to Protect Freshwater Ecosystems From Salinization" said repair costs are estimated to be almost $1,000 per ton of de-icing salt released into the atmosphere. However, he discovered a connection between acid rain and air pollution caused by the burning of fossil fuels in power plants and automobiles.

What Causes Freshwater Salt Pollution? Blame It on Land Use

Kaushal and his colleagues conducted a nationwide report in January 2018. Their study, titled "Freshwater Salinization Syndrome on a Continental Scale," found at least a third of U.S. streams and rivers have become saltier over the last 25 years. On December 3, freshwater scientist John Olson of California State University, Monterey Bay, conducted a modeling study that validated these results, indicating that the future looks briny as well. The study is titled "Predicting Combined Effects of Land Use and Climate Change On River and Stream Salinity."

Salinization levels will likely increase by at least 50% in half of U.S. streams by 2100 if salt use persists at its current pace, according to Olson's party. This may pose a threat to drinking water and doubling the amount of streams that are too salty to be used for irrigation, from 3% to 6%. The research took into account the effects of climate change.

Another significant aspect is how people use the land. Mining and oil and gas production, according to Olson, are releasing more salt by exposing fresh rock and pumping out salty groundwater." It's not uncommon to find streams that are half as salty as ocean water in those areas, he says.

The highly urbanized Northeast, where Kaushal operates, and the rural Midwest, where drainage flushes salts from the soil into the lakes, are two other hotspots. However, the arid Southwest is expected to see the most development. Olson says that the combination of expanding agriculture and decreased rainfall would necessitate careful irrigation management. The economic cost of salinization in the Colorado River Basin is projected to be $300 million per year, with $176 million in crop damage and $81 million in household damage. The agriculture sector in California loses billions of dollars per year due to salty water.

Are Corroding Ecosystems to Blame For Freshwater Pollution?

Of course, Olson is worried about the impact of salt on humans. However, he is concerned about habitats. He discovered that certain animals are extremely sensitive to salinity levels.

The study, titled "Effects of Total Dissolved Solids on Growth and Mortality Predict Distributions of Stream Macroinvertebrates," tracked the survival and development of a dozen freshwater species in two Nevada streams of varying salinity levels.

Freshwater animals have evolved to filter out the water that keeps flowing in when attempting to hang on to the salts, according to Olson. That's because their body tissues have a higher salt content than the water around them. However, entomologist John Jackson, who was not involved in Olson's research, adds that if the salt levels unexpectedly rise, the animals can experience an overdose.

Jackson works at the Stroud Water Research Center in Pennsylvania, which has a long history of studying water quality effects on mayfly larvae.

Jackson's latest study claims that at least three of the four species tested are likely to die when the salinity in a stream reaches a tenth of that of seawater.

His study, titled "Temperature Affects Acute Mayfly Responses to Elevated Salinity: Implications for Toxicity of Road de-Icing Salts," claimed that some of the insects' physiological systems are malfunctioning.

Throughout the year, the larvae of hundreds of mayfly species populate healthy streams, providing food for various animals, including fish. According to Jackson, they are also the canary in the coal mine, warning us that other insects might be in danger.

Ecologist William Hintz of the Darrin Fresh Water Institute in New York State, who has examined salinity effects on rainbow trout, said insects aren't the only ones who will suffer. Adult fish are very resilient," he said. But young fish are vulnerable. "High salt levels can stifle their development, reducing their chances of survival and reproduction."

RELATED ARTICLE: 77-Acre Pond Collapse in Florida May Cause Environmental Crisis; Here's Why!

Check out more news and information on Environment on Science Times.