SpaceX will launch its third crew to the International Space Station early Friday morning. They will carry two NASA astronauts, one Japan Aerospace Exploration Agency astronaut, and the first European Space Agency astronaut to fly a private US spacecraft into orbit. The four-person crew will blast off atop a SpaceX Falcon 9 rocket on Friday at 5:49 a.m. ET. 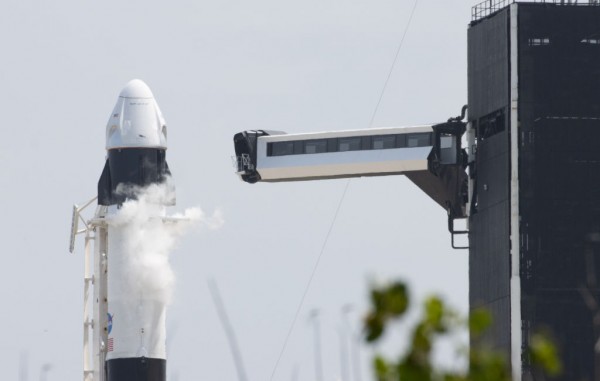 (Photo: Joel Kowsky/NASA via Getty Images)
CAPE CANAVERAL, FLORIDA - MAY 30: In this NASA handout image, A SpaceX Falcon 9 rocket carrying the company's Crew Dragon spacecraft is seen prior to launch on NASA's SpaceX Demo-2 mission to the International Space Station with NASA astronauts Robert Behnken and Douglas Hurley onboard, Saturday, May 30, 2020, at Launch Complex 39A at NASA's Kennedy Space Center in Florida.

Crew-2 is NASA's second operating project under the Commercial Crew Program. This public-private partnership aims to restore the agency's human spaceflight capability after a decade of relying on Russian rockets. Crew-2's trip first flew in May 2020 as SpaceX's first astronaut flight, carrying Bob Behnken and Doug Hurley. It will be the first time NASA astronauts board a reusable crew capsule.

The Crew Dragon spacecraft that will be used in the launch is the same one that sent and returned astronauts Bob Behnken and Doug Hurley during the first-ever crewed NASA-SpaceX mission last May, according to Kennedy Space Center director Bob Cabana.

NASA's acting president, Steve Jurczyk, said in an ABC News report that reuse is necessary. There are a lot of firsts with this mission, he said, including the fact that it is just the third crewed commercial spaceflight.

As plans for the Crew-2 flight, scheduled for Tuesday, Apr. 20, 2021, at NASA's Kennedy Space Center in Florida, a SpaceX Falcon 9 rocket with the company's Crew Dragon spacecraft aboard is seen on the launch pad at Launch Complex 39A.

CNN said two NASA astronauts, Shane Kimbrough and Megan McArthur, will accompany Akihiko Hoshide of the Japanese Aerospace Exploration Agency (JAXA) and Thomas Pesquet of the European Space Agency (ESA) on this historic mission. The mission will repeat what happened in November, launching and docking autonomously on the ISS.

The mission will last nearly six months and is around the same amount of time as the previous Crew-1 mission, which was completed and even spent the holidays in orbit. The crew will remain there until Oct. 31, or no later than that day, before returning to Earth with a splash in the Atlantic Ocean.

What Time Does SpaceX Launch Crew-2?

SpaceX's Falcon 9 rocket will launch from NASA's Kennedy Space Center in Cape Canaveral, Florida. NASA will begin live coverage of the launch just hours before liftoff at 1:30 a.m. ET on Friday. At 5:49 a.m. ET, the plane will take off. The journey to the International Space Station will take just over a day, with the crew expected to dock with the space station at 5:10 a.m. ET on Saturday, Apr. 24. They'll be at the station for six months.