Michael Collins, an astronaut who was part of the Apollo 11 flight that landed on the moon, died at the age of 90.

Collins remained behind to pilot the command module for Apollo 11, orbiting roughly 60 miles above the lunar surface. At the same time, Neil Armstrong and Buzz Aldrin placed humanity's first footprints on the moon. As a result, Collins never set foot on the moon. However, his accomplishments and those of Armstrong and Aldrin led to one of the most famous space missions in history. 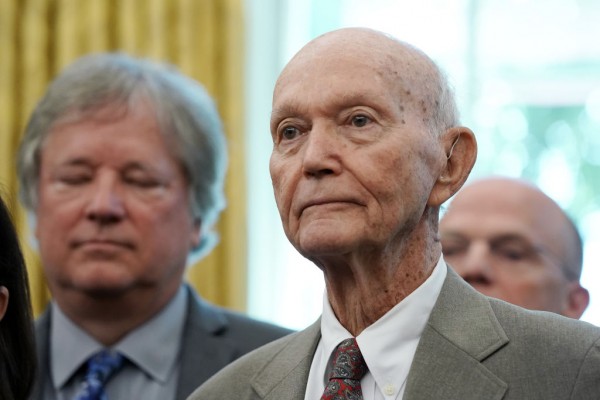 (Photo : Chip Somodevilla/Getty Images)
WASHINGTON, DC - JULY 19: Apollo 11 astronaut Michael Collins joins U.S. President Donald Trump and others as they commemorate the 50th anniversary of the moon landing in the Oval Office at the White House July 19, 2019 in Washington, DC. The first man to walk on the moon, Neil Armstrong, died in 2012

"We regret to share that our beloved father and grandfather passed away today, after a valiant battle with cancer," Collins' family said in a statement on Twitter.

His family said he passed away peacefully, surrounded by his loved ones. According to his family, Mike always approached life's challenges with grace and modesty. They added he faced his final challenge in the same way. "We will miss him terribly. Yet we also know how lucky Mike felt to have lived the life he did."

Michael Collins: What are His Accomplishments?

Collins was known for his quiet and unassuming demeanor. In recent years had become a social media presence, where he expressed "his wise insight gained both from looking down at Earth from the vantage point of space and gazing across calm waters from the deck of his fishing boat," according to his family.

I am certain, if everyone could see the Earth floating just outside their windows, every day would be #EarthDay.

There are few things more fragile or more beautiful than Earth, let’s work together today and everyday to protect our home. pic.twitter.com/XJO3RSJczw

"Whether his work was behind the scenes or on full view, his legacy will always be as one of the leaders who took America's first steps into the cosmos. And his spirit will go with us as we venture toward farther horizons."

Space.com said Collins was born in the year 1930 in Italy. Collins worked as a fighter pilot and experimental test pilot at Edwards Air Force Base in California from 1958 to 1963 after graduating from the United States Military Academy at West Point.

Collins became the third person in US history to perform a spacewalk during the mission, including a docking test and a double rendezvous in orbit.

Collins' second mission into space was Apollo 11. He focused on his lonely time in orbit around the moon in his bestselling 1974 book, "Carrying the Fire: An Astronaut's Journey," which earned him the moniker "the loneliest man in history."

"I am alone now, truly alone, and absolutely isolated from any known life," Collins wrote. "I am it. If a count were taken, the score would be three billion plus two over on the other side of the moon, and one plus God knows what on this side."

In 1970, Collins retired from NASA. After leaving the space agency, he worked as the head of the National Air and Space Museum and as the Smithsonian Institution's undersecretary.