To prepare for birth, some expectant human mothers are likely to build cribs from IKEA or guarantee that they don't miss their prenatal vitamins.

For female hoopoes, they douse their eggs in what's described in The Atlantic as a "pungent postcoital goo." Soon after they lay their eggs, these stunningly zebra-striped bird species will start painting the clutch using their beak.

The pigment they are using is made in-house. Specifically, a brown, oily element concealed by the uropygial gland positioned at the base of the tale of the female hoopoe.

The eggshells are starting out cerulean, although they turn into a mucked-up greenish-gray with every coat of fluid. 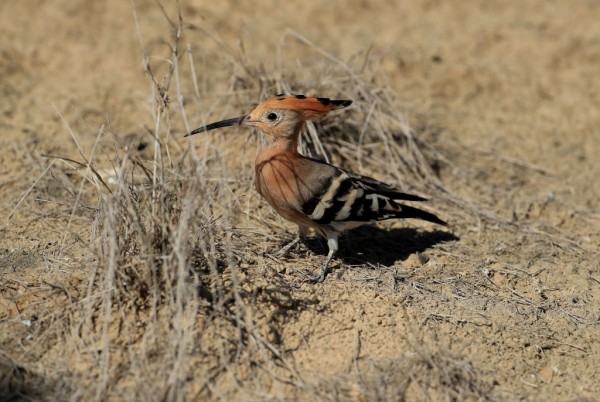 (Photo: Andrew Redington/Getty Images)
A hoopoe is pictured during practice for the Golf in Dubai Championship at Jumeirah Golf Estates on December 01, 2020, in Dubai, United Arab Emirates.

They may be subtle in appearance, explained biologist Jose Soler from the University of Granada in Spain, but the emissions are rank.

The biologist also cited the "bonanza of bacteria" inside, that they smell like quite a very strong and reeking cheese, tinted with a putrid je ne sais quoi.

Soler, who has spent many years working with the birds, said the first time he grew the malodorous bacteria in the laboratory, they tank up his whole department.

Humans might hesitate, but hoopoes definitely don't mind the stinky stuff. They blog it abundantly into the sponge-like pores of their eggs, permeating them with friendly bacteria that shield the ultimate hatchlings from pathogens, a type of living antibiotic described in Applied and Environmental Microbiology.

The grayer the shell, the more likely the embryo inside to survive, a trend that male birds, as indicated in the study, seemed to have picked up on.

In a study, Cosmetic coloration of cross-fostered eggs affects paternal investment in the hoopoe (Upupa epops), recently published in the Proceedings of the Royal Society B, Soler, together with his colleagues, reported that male hoopoes would bring more food to female hoopoes that tend less color-saturated eggs, a seeming effort to invest in higher-quality chicks.

What's shown in the research is a heartwarming exhibition of fatherhood, stimulated by a stinky cosmetic's intergenerational application.

Such behavior, which has never been observed or seen in birds in the past, is as remarkable as it is peculiar. Most documented indications exchanged between male and female birds center on so-called hot-to-trot bachelors that flash their most attractive characteristics, like astounding feathers or nest-constructing prowess, to charm ladybirds into mating with them.

This newly-discovered trick of hoopoes is turning the narrative on its head. Here, female hoopoes are doing the advertising job, following the copulatory task has been accomplished.

This latest research, which observed the egg-smearing shenanigans of hoopoes that tended more than 60 nests, appeared to nail the association.

Silvia Díaz Lora, one of the study's authors, together with her colleagues, waited for female hoopoes to paint their newly laid eggs in an assortment of hues, then shifted the contents of numerous clutches to help guarantee that the team was measuring the response of male hoopoes to color alone.

This report specified that having the nests rejiggered, they tracked the amount of food male hoopoes trucked into every female hoopoe. As the study authors expected, grayer egg sets, averagely, gained more grub for the mother.

The differences in the amount of food were not massive, and a strangely-colored clutch possibly would not transform a doting father into a deadbeat one. However, during the critical time, egg-painting might help make life cushier for some hoopoes.