New Mexico Menefeeceratops: Horned Dinosaur From 82 Million Years Ago, First of Its Kind

A horned dinosaur that lived roughly 82 million years ago in New Mexico is newly described as the first known ceratopsid species, a group of dinosaurs known for their horns and frills, as reported by Phys.org. Researchers' latest description of the horned dinosaur provides key information that scientists can use to further understand the complex evolution of ceratopsid dinosaurs. 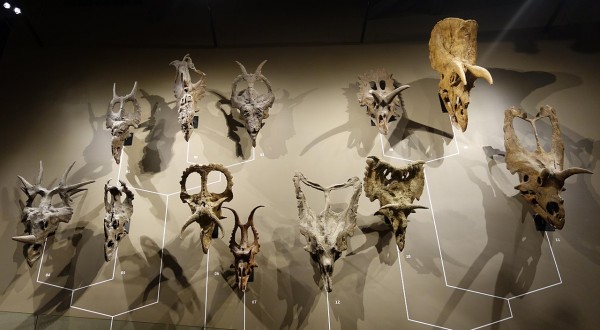 One of the most infamous ceratopsids is the Triceratops. This group of dinosaurs is believed that the oldest of the ceratopsids lived roughly 140 million years ago with their giant bony frills and horns characteristic of other dinosaurs.

One hundred million years ago, during the Late Cretaceous era, ceratopsians began diversifying in Asia and North America.

Fossilized remains of their "beaks" and grinding cheek teeth suggest that the large horned dinosaurs fed mainly on vegetation. Researchers believe that the heavy frills or horns found on ceratopsians like the Triceratops served as the animal's armor against predatory attacks from Tyrannosaurus and other carnivorous beasts.

In a study published in the journal PalZ entitled, "The oldest centrosaurine: a new ceratopsid dinosaur (Dinosauria: Ceratopsidae) from the Allison Member of the Menefee Formation (Upper Cretaceous, early Campanian), northwestern New Mexico, USA" the Menefeeceratops sealeyi received a new description as the first horned dinosaur to walk the face of the Earth roughly 82 million years ago.

The latest discovery paints a clearer picture of the centrosaurine subfamily of the ceratopsid dinosaurs. Peter Dodson from the Department of Earth and Environmental Science at the University of Pennsylvania explains that there has been a significant increase in knowledge about ceratopsid diversity in the past few decades.

However, he explains that most of these findings were results from discoveries in the North, such as Utah and Alberta. This is why the recent discovery of a significantly older specimen from the south has highlighted the importance of the Menefee dinosaur in understanding the evolution of creatures and fauna during the Late Cretaceous era throughout western North America.

Fossilized specimens of the newly described species and multiple bone samples from other individuals were originally discovered by Paul Sealey in 1996 as a research associate for the New Mexico Museum of Natural History.

Tom Williamson from the museum briefly describes the discoveries in the following year, and recent research on various ceratopsid dinosaurs sheds new light on fossils. Based on recent investigations, the team of researchers determined the fossils represented a new species. The genus name of Menefeeceratops is an ode to the Menefee rock formation in which the fossil was found.

Menefeeceratops have been confirmed to be related to Triceratops but predate the infamous horned dinosaur and other ceratopsids discovered. Compared to its renowned cousin, the Menefeeceratops is relatively smaller, growing at roughly 13 to 15 feet long, almost half of a full-grown triceratops.

Despite the fact that not all of the creature's bones were recovered, a significant amount of its skeleton was preserved, including several parts of its lower jaws, skull, forearms, pelvis, hindlimbs, vertebrae, and ribs. These bones show clues as to how unique the Menefeeceratops is compared to other dinosaur species and give clues on how it thrived during its heyday and its life history.

RELATED ARTICLE: Study Reveals Pint-Sized Dinosaur from Mongolia Could See as Well as an Owl in the Night