The World Health Organization yesterday said the new Indian COVID-19 variant responsible for the fast acceleration of explosive outbreaks in India had been detected in dozens of countries worldwide.

AN NDTV report said that according to the UN health agency, the new strain identified as B.1.617 variant of COVID-19, originally discovered in India in October 2020, had been detected in over 4,500 samples uploaded to an open-access databank from 44 nations in all six regions of the WHO.

In its weekly update on the COVID-19 crisis, WHO said it received reports of detections from five countries more. Outside of India, WHO said Britain had reported they had the largest number of COVID-19 cases caused by the said new strain.

Earlier this week, the health organization declared B.1.617, counting three so-called sub-lineages with a bit different mutations and features as a "variant of concern." 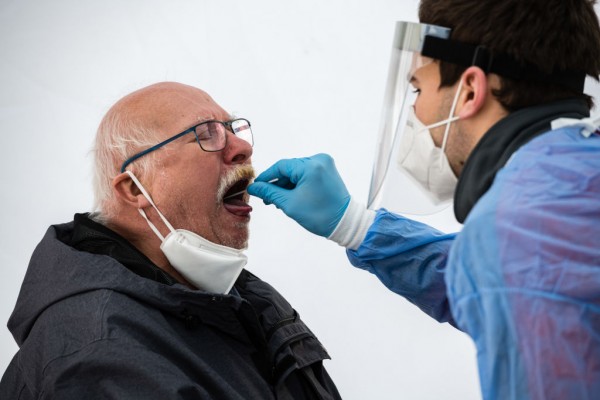 (Photo: Jens Schlueter/Getty Images)
The WHO recently announced the Indian COVID-19 variant responsible for the fast acceleration of explosive outbreaks in India has been detected in dozens of countries worldwide.

The new Indian COVID-19 variant was consequently added to the list that contains three other variants of the virus, those first traced in Britain, Brazil, and South Africa.

The said variants are observed as more dangerous compared to the original version of COVID-19 since they are more communicable, fatal, or can get past some vaccine shields.

The WHO yesterday explained that the said new variant was added to the list as it seems to be transferring more easily compared to the original virus, referring to the rapid rise in occurrence and prevalence in several countries.

Furthermore, the organization pointed to initial evidence that the strain was more resistant to treatment with the Bamlanivimab monoclonal antibody, and emphasized too, early stub studies that specified limited reduction by antibodies in neutralization.

The WHO elaborated though that real-world effects on the vaccines' efficacy against the variant, for example, may be limited.

WKMS reported a new strain identified in India has reportedly more than a dozen mutations, although a pair, in particular, have been found to be the more concerning.

According to Cambridge University microbiologist Ravi Gupta, these said mutations are detected on an essential part of the virus where the immune system attacks.

Therefore, said the microbiologist, the reason they were labeled a "double mutant," because they had these two big mutations in two big locations, and that's what's causing all the worries and apprehensions.

This news report specified that each of the said mutations has separately cropped up in other areas of the world, specifically, one in Brazil, and another in California.

More so, research has shown that by themselves, each of the mutations provides the virus with an advantage against the immune system. It lessens the antibodies' ability to combat the virus.

Hope for Vaccine Efficacy Against the Indian Variant

Gupta said the individual mutations reduced vulnerability to neutralization by vaccine antibodies, so, it does somewhat, cause a drop in reaction to vaccines.

To know what happens when two mutations join forces, Gupta, together with his team took antibodies from those who got vaccinated with Pfizer and then sought to see how much the pair of mutations together lessen the antibodies of people to kill the virus.

What they observed, the expert said, was hopeful. The double mutant behaved so much like a single mutant and therefore, it was not double trouble.

Gupta also said, consequently, there did not appear to be "this addition of one on top of the other." And that was indeed quite, this microbiologist thinks, that's really essential as that's what the supposition has been, that's causing all the panic.

Together, the data suggested that the Pfizer and Moderna COVID-19 vaccines will work efficiently against the variant in India.

These jabs may be less effective at warding off disease, although they should continue offering high protection from mortality and severe disease.

This is quite great news for the US where the said vaccines are available. However, in India, the most commonly used vaccine is the one AstraZeneca developed.

A related report is shown on Global News's YouTube video below: