Another theme linked to this conspiracy theory that has been circulated extensively on social media, the so-called COVID-19 vaccine magnet challenge, has been debunked by scientists.

Videos have recently surfaced on social media sites such as Twitter and TikTok. People put tiny magnets on the arm of someone who has allegedly taken a COVID-19 vaccine injection.

Guys WTF is this? pic.twitter.com/nmBe1psXQP

The Claim: COVID-19 Vaccines are Not Magnetic

COVID-19 vaccine rollout is now at a slower pace, Global News said. As age eligibility for the vaccine extends to cover children aged 12 and up, one social media post revisits early pandemic concerns. 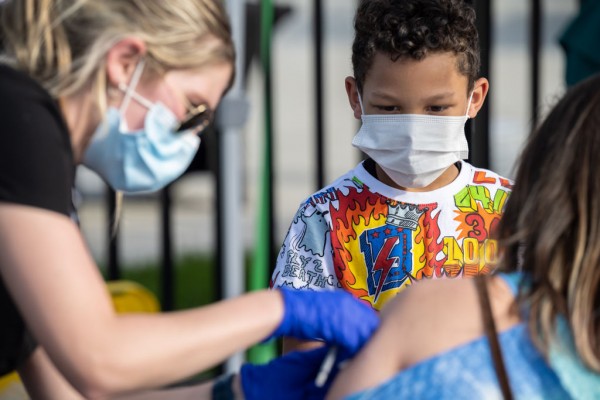 (Photo : Jon Cherry/Getty Images) A child watches as a nurse administers a shot of COVID-19 vaccine during a pop-up vaccination event at Lynn Family Stadium on April 26, 2021 in Louisville, Kentucky.

The video of an anonymous masked woman showed a small silver magnet that appears to attach to one arm, where she allegedly got the Pfizer injection, but not the other, unvaccinated arm. An Instagram user, Keep Canada Free, shared the footage on Instagram on May 10.

The 25-second video has over 20,000 Instagram views. Netizens shared the misleading information on social media sites, including Twitter. A resized version uploaded on May 8 also argues that the vaccine has "magnetic reactions."

It's unknown whether Instagram user Keep_Canada_Free was vaccinated or whether she used a real magnet. However, one thing is certain: the COVID-19 vaccines do not induce magnetic reactions nor do they include monitoring devices.

USA Today said the claim that the COVID-19 vaccines contain microchips is based on a conspiracy theory that claims Bill Gates, the co-founder of Microsoft, is behind a multinational plot to "secretly implant and monitor people." Business Insider said Gates had refuted the claim several times.

The COVID-19 vaccines were also said to have microchips that used radio-frequency identification, or RFID, technology. USA TODAY said the argument arose from reports of a collaboration between the federal government and ApiJect Systems to develop a high-speed supply chain for pre-filled syringes with RFID monitoring capability.

Any conspiracy theories go so far as to say that it will modify the DNA, create cancer cells, and even cause infertility.

Australian academics who spoke to the Australian Associated Press said many people are buying these ideas and, in essence, resisting having a COVID-19 jab.

Vaccines are Not Magnetic; Magnetic Substance is Painful to Inject

Edward Hutchinson, a professor at the University of Glasgow's Centre for Virus Research, told Newsweek vaccines do not contain magnetic materials in their ingredients.

He went on to say that if the video were to be believed, a huge lump of substance should be visible to the naked eye. In its attempt to adhere to the magnet, the aforementioned substance can produce a noticeable bulge.

Hutchinson also suggested using a fridge magnet to pick up metal between the index and thumb to help imagine the process.

Finally, the lecturer asked whether an alleged magnetic substance had any impact on vaccine efficacy. He repeated that it isn't magnetic in the least.

Al Edwards, an associate professor of biomedical science at the University of Reading, also told Newsweek in the same report that injecting a magnetic agent into people's arms is painful.

Vaccine elements, according to the professor, are identical to food molecules. He went on to say that food didn't make magnets bind on humans.

Edwards went on to say that while some vaccination needles are metallic, they cannot be left in the body. He also said that the injection is often made of stainless steel, which isn't magnetic.

As scientists demonstrated to Newsweek, the far-fetched hypothesis of magnets is not valid at all.