Mixing doses of COVID-19 vaccinations raises the risk of mild to moderate side effects instead of administering two shots of the same vaccine. However, experts say it could double the protection against the coronavirus. 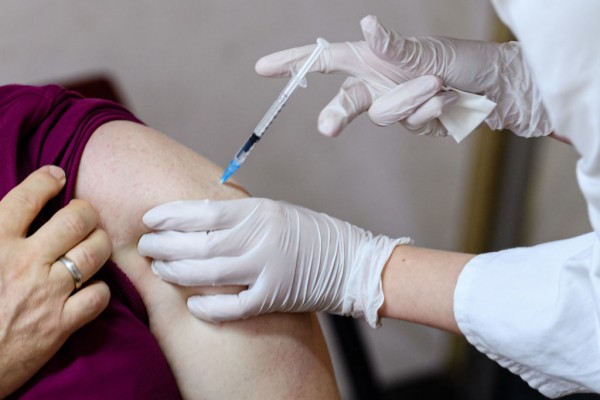 (Photo : Jens Schlueter/Getty Images)
The FDA expanded the emergency use authorization or EUA of the Pfizer COVID-19 vaccine to include young individuals aged 12 to 15 years old.

In the study, 830 volunteers over the age of 50 were given four separate variations of the AstraZeneca and Pfizer-BioNTech vaccines. The first complete set of results is scheduled to be released in June.

The study, titled "Heterologous Prime-Boost COVID-19 Vaccination: Initial Reactogenicity Data," is published in the peer-reviewed journal The Lancet on Thursday.

According to preliminary findings, participants who received a mixed schedule of vaccines had more frequent reactions than those who received regular non-mixed schedules. The side effects include chills, nausea, headache, and muscle pain.

In a Fortune report, researchers said none of the side effects were extreme and described them as "mild to moderate." They also stated that the effects were temporary, lasting only a few days. Combining the Pfizer and AstraZeneca vaccines had resulted in no other safety issues.

"The results from this study suggest that mixed-dose schedules could result in an increase in work absences the day after immunization, and this is important to consider when planning immunization of healthcare workers," Matthew Snape, the chief investigator on the Com-Cov trial, said in a CNBC report. Snape is an associate professor in pediatrics and vaccinology at the University of Oxford.

Several countries will be watching the results closely as they consider combining COVID-19 vaccines in immunization programs, either due to safety concerns about the AstraZeneca shot after reports of blood clots in some recipients or to help shore up stocks.

According to The Guardian, those in the younger age bracket have greater vaccine reactions than those in the older age bracket, as shown by real-world data. However, in a ward full of nurses, this mixed schedule could lead to higher absenteeism.

The impact assessment among participants will be the subject of Com-next Cov2's report. For the first dose, this would amplify the effects of the AstraZeneca and Pfizer vaccines. The Novavax or Moderna vaccine will be used for the second dose this time.

It's still unclear if the mixed-dose approach would have "double defense" against COVID-19.