Coelacanths, an extinct fossil that dates back to roughly 420 million years ago, was unexpectedly found in the tropical island-country of Madagascar in East Africa.

A team of South African shark hunters was stunned to rediscover a population of fish that predates dinosaurs that have been, for decades, believed by the scientific community to be extinct.

According to reports from Mongabay News, a nonprofit environmental conservation group coelacanths, the four-legged fossil fish has just been found alive and kicking in the West Indian Ocean just off the coast of Madagascar. 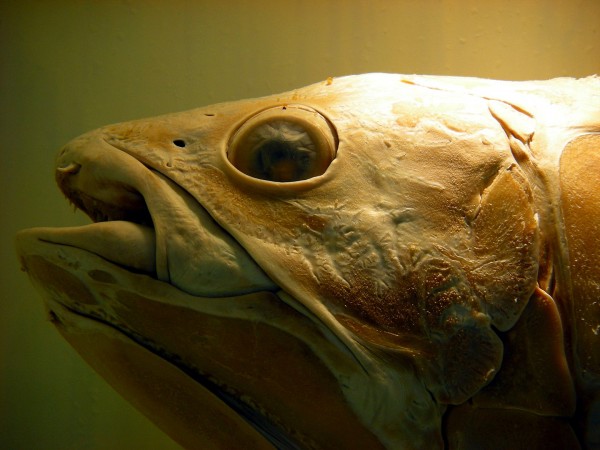 Coelacanths or Latimeria are carnivorous fish that live up to 60 years and grow as large as 6.5 feet and weigh approximately 198 pounds.

According to National Geographic, these primitive-looking coelacanths are believed to have gone extinct 65 million years ago along with the dinosaurs. However, in 1938, sa South African museum curator ignited a scientific debate on how the unique lobe-finned fish fits into the existing evolutionary timeline of land animals.

Coelacanths are rarely sighted deep-sea creatures that thrived in depths of up to 2,300 feet below the surface.

The uniqueness of the "four-legged living fossil" is its paired lobe fins extending away from its body like human legs alternating pattern similar to a trotting horse.

Rediscovered "Living Fossil" Off the Coast of Madagascar

The unexpected rediscovery of the "living fossils" was thanks to the shark hunters using gillnets during their expedition.  As the hunters targeted sharks for their oil, fins, and various other commercial enterprises, their devices were able to reach deep-sea nets where coelacanths gathered roughly 328-492 feet below the surface.

A recent study published in the journal SA Journal of Science, entitled "Coelacanth discoveries in Madagascar, with recommendations on research and conservation" warns that the "four-legged fossils" may face new species-level threats to their survival due to the uptick in shark hunting that boomed in the 1980s.

The authors of the study wrote that jarifa gillnets that are used to catch sharks are relatively new and believed to be a more deadly innovation because they are large and can be set in deep water.

Researchers fear that the rediscovery of the coelacanths may lead to heightened risks of "exploitation" especially in Madagascar where past sightings have been cited. The team wrote that there is no doubt that the sizeable mesh jarifa gillnets is, as of today, the biggest threat to the coelacanth's survival in Madagascar.

The study goes on further purporting that Madagascar is more than likely to be the "epicenter" of many coelacanth subspecies which is why it is vital that local and international conservation steps be taken to preserve the extraordinary species that has predated the dinosaurs.

Despite the researcher's documented stance on coelacanth hunting, not all researchers agree with recent findings.

Paubert Tsimanaoraty Mahatante, a Madagascan government marine researcher tells Mongabay News that he isn't concerned that the coelacanths would become a hot commodity to hunters.  He explains that catching these species is uncommon and people, in some ways, are afraid to lure and catch a species that is uncommon. This leads him to the notion that the "living fossils" aren't going to be deliberately targeted anytime soon.

Check out more news and information on Endangered Species on Science Times.