The first images from China's Zhurong rover on Mars have been released.The scenery ahead of the robot as it sits on its landing platform is visible in the forward view, while Zhurong's solar panels are visible in the back view. The rover arrived on Mars early Sunday morning, Beijing time.

As a result, China became only the second country, after the United States, to successfully land a probe on the surface of Mars and run it for an extended period.

At its current position on Utopia Planitia, a huge landscape in the planet's northern hemisphere, Chinese scientists expect to get at least 90 Martian days out of the six-wheeled robot.

The images were posted on the website of China's National Space Administration (CNSA). A pair of brief videos show the rover's aeroshell - the capsule it used to penetrate the Martian atmosphere - separated from the Tianwen-1 orbiter. This spacecraft transported it from Earth. 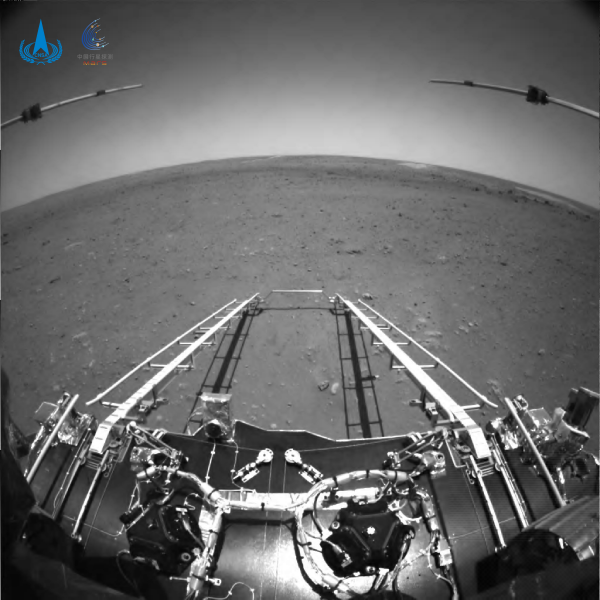 (Photo: CNSA)
CNSA released the images taken by the Chinese Mars rover during the landing process of China’s Tianwen-1. The landing platform, departure ramp, solar wing, antenna, and other mechanisms of Zhurong were deployed normally.

"Can't you learn from NASA propaganda?" one user wrote beneath the statement. The commenter seems to compare the agency to NASA's live streams of its current mission on Mars, which Science Times reported in February.

The surface imagery indicates that vital hardware installations after landing went off without a hitch.

The solar arrays were unfurled to provide power to the robot; the antenna was released to connect with Tianwen-1 and then with controllers back in China; and the ramp down which Zhurong would soon roll to begin its mobile mission was extended.

The images were the first official confirmation that China's lander had made it to the surface.

The black-and-white image depicts the ramp that will lead the rover from the lander to the earth, throwing a crisp shadow on the ground. The arc of the horizon is due to the wide-angle lens.

The other color shot reveals the rover's back and indicates that the solar panels that will fuel the spacecraft have successfully unfolded. The red rocks and soil of Utopia Planitia, the impact basin where NASA's Viking 2 probe landed in 1976, can be seen in the background.

James W. Head III, a professor of geological sciences at Brown University, said the terrain is very different from that of the Viking Lander 2 site, which is on the northern side of the Utopia Basin and has several boulders and rocks.

Head said the landscape around Zhurong seems to be flatter and devoid of boulders, with some interesting rocks in the foreground but mainly fine-grained sediment in the background.

"This could be sediment emplaced in an ancient Mars ocean, and it could be glacial and ice-related materials too," Dr. Head told New York Times.

Two short videos of the lander separating from the orbiter that took it to Mars were also released by the Chinese service.

Zhurong is equipped with a variety of instruments for studying the topography, geology, and environment of the earth. One aim is to learn more about the ice distribution in the region, which may one day help to support human visits. In a few days, it is expected to push away from the lander.

Sen. Bill Nelson, the new NASA chief, lauded CNSA and China's efforts to learn more about Mars through the newly landed Zhurong rover. In a tweet, the chief hopes that China and the CNSA will report or make public their observations to expand the international space community's knowledge of Mars.

I would like to second that congratulations. Outstanding accomplishment by China!

Elon Musk, the CEO of SpaceX, has responded to the threat. Musk also congratulated China and expresses his delight at the Asian nation's achievement in this endeavor. Furthermore, the CEO described this as an "outstanding achievement" for China, especially given that it already had first-look images from its rover.

RELATED ARTICLE: China's Successful Mars Mission: What Will the Zhurong Rover Do?