At last, the long-anticipated Mars rover of the Tianwen-1 mission has landed on the red planet. The first Mars project from China successfully roamed Zhurong's wheels on the planet's surface after months of preparation.

Zhurong, China's solar-powered rover, has been able to drive on the surface of Mars. Right after the landing, the rover sent black and white images that were taken by its obstacle avoidance camera. Following the first batch of photos, the rover immediately processed the colored version using its navigation camera, reports ZME Science. 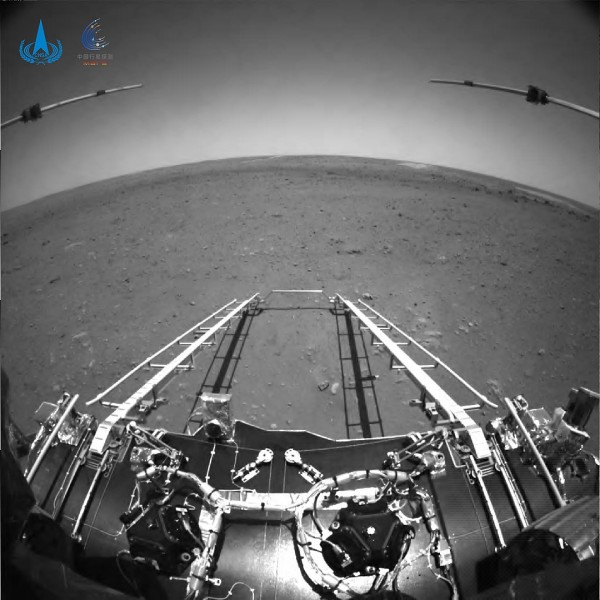 The Chinese rover commenced a new set of phases once it touched down Mars this week after a long ride on China's Mach 5 rocket. Along with the initial procedures is to report through sharing the first images the rover has captured. Some of the rover's components, including its wheels, can be seen in the pictures Zhurong transmitted to the China National Space Administration (CNSA). Other images include the dusty surface of the red planet and the ramp stages of the rover.

The priority of the Zhurong rover is to explore and observe one of Mars' plain regions called Utopia Planitia, located on the planet's northern hemisphere. Like any other rover we have sent on the red planet, Zhurong is equipped with a number of scientific instruments to gather data and examine the field.

China's Zhurong is slightly taller than its predecessors, NASA's Opportunity and Spirit, with a height of 1.8 meters or about 6 feet tall. It weighs 240 kilograms or almost 530 pounds due to the pieces of equipment attached. However, the craft is smaller than the crafts currently on Mars, Nasa's Perseverance and Curiosity.

The Chinese craft can manage to climb up on an elevated area with a slope of up to 20 degrees and go over obstacles with a maximum of 30 centimeters or 1 foot tall. The rover's active suspension and six-wheel installation allow itself to maneuver and escape out of sand traps in every possible way, like a crab's movement.

One of the main objectives of the mission is to find ice on the planet's subsurface. Along with it, the rover will also measure and analyze the structure and composition of the red planet's minerals. The Mars rover will also monitor the magnetic field and atmospheric data, reports CNET.

Zhurong's most important apparatus are the solar panels especially engineered for the mission. Its structure will not be obstructed by any sand particles that could block the energy receiver. The good thing about the craft is that it has an active heater that could manipulate the rover's temperature, surviving the extremities of Mars' climate.

The Tianwen 1 orbiter will be in touch with the Zhurong rover for a time. Zhurong will carry out the mission in a maximum of three months, but the Chinese orbiter will be stay for 1 Martian year or at least 2 Earth years.