Astronomers have constructed the most detailed map of the universe's dark matter ever.

This is no easy task, given that dark matter is invisible. Because its tremendous gravitational forces may pull entire galaxies together, scientists know this mysterious relative of normal stuff exists. Astronomers estimate that dark matter makes up one-quarter of the universe based on measurements of its influence. 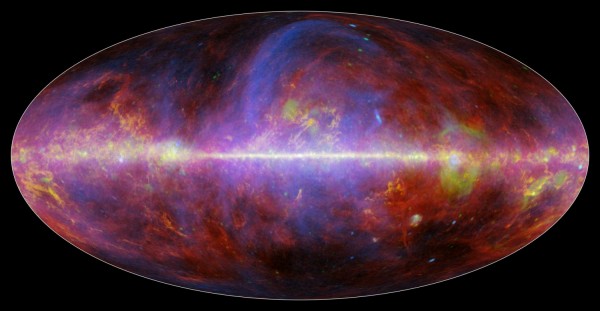 (Photo: Portrait of our Milky Way galaxy shows a mishmash of gas, charged particles, and several types of dust/ESA/NASA/JPL-Caltech)

The new map came from years of study by the Dark Energy Survey, a consortium of 400 scientists from seven countries (DES). They used the Victor M. Blanco Telescope in Chile to peer into the sky and saw millions of galaxies linked by dark matter. Astronomers can learn how much dark matter lies between those galaxies and our planet by looking at their distribution and how light from them reaches Earth.

The researchers demonstrated that the cosmos is riddled with enormous clusters of galaxies bunched together - places where dark matter is tightly packed as well - in a series of experiments published this week. However, their map, which spans around one-eighth of the sky as seen from Earth, also shows areas of the universe that are nearly empty of dark matter and galaxies. Interstellar gas appears to connect these congested and unoccupied places in a cosmic web.

"It shows us new parts of the universe that we've never seen before. We can really see this cosmic web structure, including these enormous structures called cosmic voids, which are very low-density regions of the universe where there are very few galaxies and less matter," Niall Jeffrey, a cosmologist at University College London, said per News18.

The discoveries, according to Jeffrey, reveal that gravity may not act in these voids in the same way it does on Earth. It implied that the usual rules of physics do not apply.

ALSO READ: Dark Matter Origin Still a Mystery: Is It More Than a Cosmic Anomaly?

Map Made Of 226 million galaxies

While dark matter is invisible, the gravitational pull on other objects in the universe allows scientists to detect it.

Like a kaleidoscope, dark matter bends light originating from other galaxies toward Earth. Astronomers can compute how much dark matter resides between us and another galaxy and how smushed together that dark matter is by analyzing the strength of that distortion. If a galaxy's light is highly warped, it means the dark matter that obscures it is densely clumped.

As a result, MIT Technology Review said Jeffrey and his colleagues investigated how light from more than 226 million galaxies was distorted.

Between 2013 and 2016, they used the telescope to take photographs of those galaxies for 345 nights, then used a specific artificial-intelligence software to turn those data into a precise dark matter map.

Before the survey finished in 2019, the team collected data on another 413 nights. Hence, DES scientists per Fermilab hope to use the rest of their observations to create an even larger, more detailed dark-matter map.

Map Suggests Einstein's Theory of Relativity Might Have Been Wrong

According to Albert Einstein's theory of relativity after the Big Bang 13 billion years ago, gravity should have led bits of stuff in the universe to clump up in a predictable pattern.

However, the DES map implies that Einstein's theory may have missed the mark to some extent.

"If this disparity is true, then maybe Einstein was wrong," Co-lead author Jeffrey told BBC.

"You might think that this is a bad thing, that maybe physics is broken, but to a physicist it is extremely exciting," Jeffrey added.