Growing Sinkhole Opens in Mexico Home; Scientists Explain What This Phenomenon Is

Some 60-meter-wide sinkhole has emerged in a central Mexican farmer's land, threatening to damage a nearby house. The sinkhole is around 20 meters deep and is located in Santa Maria Zacatepec, Puebla state. The earth swallowed roughly 70,000 square feet of Mexican cropland.

Puebla's environmental secretary, Beatriz Manrique, said in an El Sol de Mexico report that the large cavity formed after appearing around 15 feet across and has since expanded swiftly.

Since last weekend, state civil engineers and many other authorities have inspected the site. Locals have been asked not to approach the mouth, according to PC Estetal Puebla's official Twitter account.

A house near the location was also evacuated until the area was declared safe by investigators. Before discovering the massive pit, homeowners Magdalena and Heriberto Sánchez reported hearing a tremendous roar.

"At 6 o'clock we heard thunder and we did not think this was it and then my in-laws realized it and when I got closer, I saw that the earth sank and how the water was bubbling and I panicked," Magdalena told El Sol de México, per Newsweek's English language report Tuesday.

Magdalena and Heriberto also mentioned that they couldn't come back to their homes. They explained that their house is on the verge of falling into the crater.

Heriberto, originally from the state of Veracruz, told local media, Agence France-Presse reported that they have no relatives there.

"The authorities have not told us anything, but we see that our house is at the bottom of the sinkhole," said Magdalena in a follow-up story in El Sol de México on Wednesday.

Magdalena was saddened over the incident since they built their house with "a lot of effort [and] sacrifice," but a sinkhole appeared.

Locals say the field was built on top of what was formerly a big pond known as a jagüey.

A resident told TV Azteca they have no idea why that sinkhole appeared. Locals believe the water struggled to reclaim its space, which is why it occurred. 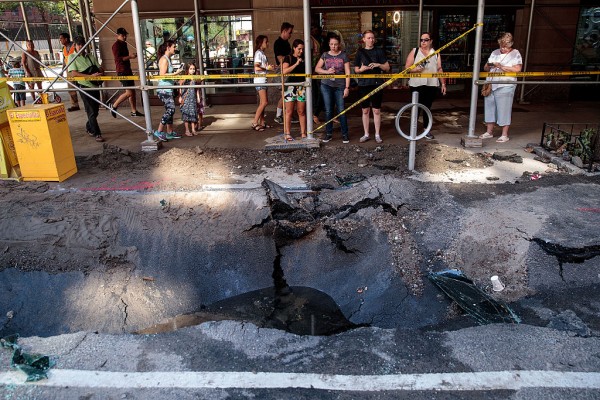 (Photo: Drew Angerer/Getty Images)
[PHOTO FOR REPRESENTATION ONLY] NEW YORK, NY - AUGUST 30: Pedestrians stop and look at a sinkhole caused by a water main break on Amsterdam Avenue, in the Upper West Side section of Manhatten, August 30, 2016, in New York City. Water started flowing Monday night from a broken pipe, and crews continued with repairs on Tuesday morning.

Environmental officials have speculated that the occurrence may be linked to the Alto Atoyac sub-basin. It is a part of the Balsas River Basin network that stretches through many states in central Mexico. According to Manrique, aquifer extraction may have resulted in soil "softening" over time.

At a press conference on Monday, Puebla Governor Miguel Barbosa Huerta warned the situation is "a matter of enormous risk."

Experts Explain What Sinkholes Are

The US Geological Survey said per Live Science that sinkholes are pits in the ground when water collects in regions with no external drainage. Water can dissolve subterranean caverns when it drains below ground, especially in locations where the bedrock is formed of water-soluble evaporate minerals like salt or gypsum or carbonate rocks like limestone or dolomite.

Science Times previously explained that sinkholes typically develop over time. Occasionally, though, the collapse occurs abruptly. Sinkholes that appear out of nowhere and engulf automobiles, homes, and streets are common.

A sinkhole can be caused by a variety of factors. It's a material just underneath the surface that is changing to a new location.

A sinkhole can range in size from a little hole in the earth to a massive hole that stretches for half a kilometer. Chongqing, China, is home to the world's deepest sinkhole, which reaches a depth of 662 meters.

Because they lack natural surface drainage, any water that enters a sinkhole cannot escape through the surface and must instead drain downward into the underlying layers.

It's challenging to determine the world's largest sinkhole as they are unstable and difficult to study geological structures, after all. But China's "Heavenly Pit," Xiaozhai Tiankeng, is the leading contender. The depth and width of this ancient sinkhole are approximately 2,170 feet (662 meters) and 1,760 feet (527 meters).