As a nestling, Mia, a wild vulture, suffered from a major leg injury. Sheep wool was used by her parents to keep the nest together. Unfortunately, the fibers tangled around the juvenile vulture's ankle cut off her foot's oxygen supply and led to the death of her talons.

On the bright side, a team of veterinarians was able to spot and treat Mia's injury. However, the foot was beyond repair, and amputation of her right leg was the only way to save her. 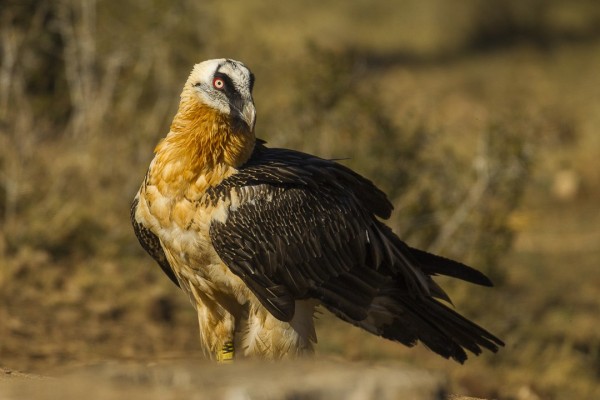 Gypaetus barbatus, or the bearded vulture, is the largest bird in the Alps and is one of the rarest raptors in all of Europe. The rare vulture's nests on elevated rocky ledges exclusively inhabiting high mountainous areas. The estimated global population, according to the World Wide Fund for Nature, ranges from 2,000-10,000 birds. No other raptor has had the same deep impression on people as the bearded vulture, with numerous legends and fables concerning it.

A bearded vulture can grow up to 1.15 meters with a wingspan of about 2.7 meters and weigh 5-7 kilograms. For bearded vultures, lacking a foot is a sealed death sentence due to its inability to feed itself. Listed as 'near threatened' by the International Union for Conservation of Nature. Strong legs power to lift their body weight and seize their prey is a basic skill that bearded vultures depend on.

Dr. Oskar Aszamann, a reconstructive surgeon from medUni, Vienna, said in a statement that it was clear that Mia would not be able to survive for long given her sorry condition. Sarah Hochgeschurz from the University of Veterinary Medicine, Vienna, and Dr. Aszmann led a team of veterinarians to conduct limb reconstruction on the wild bearded vulture. But this type of procedure has never been performed on a bird, let alone the largest raptor in Europe.

One of the first challenges the team was presented was designing Mia's prosthetic limb. The bionic leg would have to be durable enough to withstand the bird's daily grind and should be able to grip prey and withstand the shock of landing such an immense mass of bird.

Hence, the team designed custom implants for Mia that would be mounted directly into her surviving leg bone.

The unique technique is known as osseointegration. Surgeons began by installing a metal anchor in the wild vulture's leg bone where the ankle was previously attached. Over time, Mia's bone would grow into the metal threads, successfully integrating the metal rods into Mia's skeleton.

The cylindrical design of the bionic leg is intended to minimize any risks of the bearded vulture twisting and damaging her leg when the prosthetic would get caught on branches, while the metal anchor provided Mia with high-level tactile freedom. The team of veterinarians described their design and procedure in a study published in the journal Scientific Reports, entitled "Avian extremity reconstruction via osseointegrated leg-prosthesis for intuitive embodiment."

After adapting to her new bionic legs, Mia can now land and walk using both her feet, roaming the wild, feeding on bones of other mammals thanks to her bionic titanium leg, the first-of-its-kind.