LEGO Succeeds in Creating Recycled PET Plastic Bricks, But Will Take "Some Time" Before Hitting Shelves

Taking a major step towards its target of sustainable production by 2030, The LEGO Group has recently released its prototype brick made entirely from recycled plastic.

In its company press release, the Danish toy manufacturer noted that its use of recycled plastic is the latest step in realizing its aim of creating interlocking plastic bricks from sustainable material. For the prototype, LEGO used recycled Polyethylene terephthalate, or PET plastic, a general-purpose thermoplastic material often used for disposable plastic bottles, according to the online material platform Omnexus. In the reveal, the prototype is the first LEGO brick made from recycled plastic that meets their "strict quality and safety requirements."

"We are super excited about this breakthrough," says Tim Brooks, The LEGO Group Vice President of Environmental Responsibility, in the company press release. He notes that the main challenge in their shift to sustainable materials is to innovate materials that are just as durable, strong, and high-quality as their existing bricks, not to mention the need to fit with the elements they have made over its six-decade history. 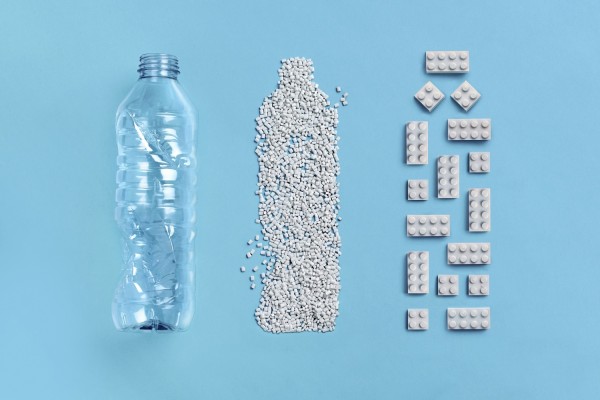 ALSO READ: How Can Lego Help With Technical Skills for Medical Training?

An Exhaustive Effort Toward Sustainable Alternatives

Before arriving at the first-ever LEGO brick made from recycled PET plastic, LEGO reveals having a team consisting of more than 150 members working towards finding sustainable alternatives for the iconic interlocking brick. It reportedly took more than three years, with engineers and materials scientists testing over 250 variations of PET plastic plus hundreds of other plastic materials.

In the PET plastic prototype, LEGO says that it meets their quality, safety, and play requirements, including the clutch power needed to connect and hold these pieces together.

However, the Danish toy company also discloses that "it will be some time" before bricks made from recycled materials appear in their commercially available products. It expressed commitment to continue tests and development before evaluating whether it's fit to move to the pilot production phase - a process expected to take at least a year.

Brooks added that The LEGO Group knows kids care about the environment, and though it will take some time before these recycled bricks hit the shelves, they want kids to know that LEGO is working on it.

"Experimentation and failing is an important part of learning and innovation. Just as kids build, unbuild and rebuild with LEGO bricks at home, we're doing the same in our lab," the LEGO VP added.

The PET plastic prototype uses recycled materials sourced from US-based suppliers that follow the US Food & Drug Administration (FDA) and the European Food Safety Authority (PESA) regulations on the use of plastic. LEGO also shared that, on average, a one-liter PET plastic bottle could create ten pieces of a 2x4 LEGO brick.

The LEGO Journey Toward Sustainable Production

Its recent PET plastic prototype, patent-pending, is the latest effort of the global toy brand following its announcement in 2019 that it will start phasing out single-use plastic retail bags in its stores at the start of 2020. Since then, it has shifted to the use of paper bags - made from fully recyclable paper that is 100% certified by the Forest Stewardship Council (FSC).

Other efforts of the Danish toy manufacturer involve the use of recycled plastic in its packaging blisters in 2018, which was announced as a temporary measure as they eventually phase out blisters altogether. In the same year, LEGO launched its first set of sustainable bricks made from responsibly sourced sugarcane to create bio-polyethylene (bio-PE) for its botanical elements, such as LEGO plant parts.

Check out more news and information on LEGO in Science Times.