Lego is commemorating the 40th anniversary of the first space shuttle mission and the Hubble Space Telescope launch, which took place 31 years ago. Hence, they developed the Space Shuttle Discovery kit - which includes the telescope - in collaboration with NASA. 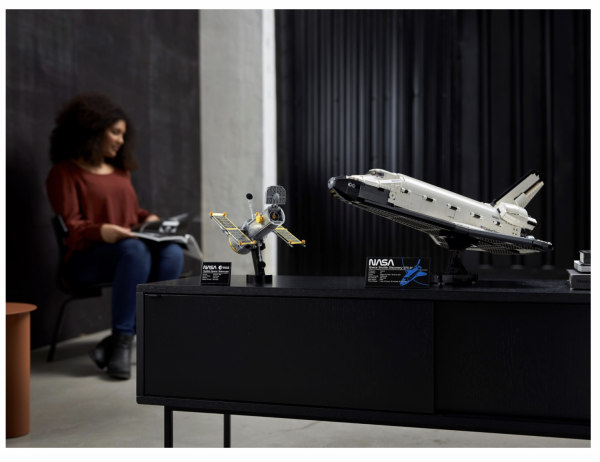 The 2,354-piece adult-targeted build is a 1:70 scale replica of the real thing. A working landing gear, payload bay doors, elevons, and rudder are included in this Discovery edition.

Milan Madge, a Lego set builder, told Space.com that he grew up in England watching the space shuttle program and playing with Lego sets in the backyard.

He said he would constantly drop bricks in the lawn, much to his aunt's chagrin, who liked to create sets for him. Madge, who is now in Denmark, described designing a functional shuttle that would still hold together in Lego format as an imaginative challenge.

"We've done a lot of space shuttles in the past, around half a dozen, but they tended to be fairly small-scale to include the solid rocket boosters and the external tank," Madge said. He explained that they're making a bigger version because they wanted to capture lots of little details.

The payload bay, where Hubble was housed and deployed during several shuttle launches, was one of the most difficult construction problems. For full realism, the payload bay must be hollow, but Madge's concept team struggled at first to prevent the front and back from breaking off.

Finally, innovative middle-section reinforcement was implemented, not least to maintain the landing gear operational. Madge explained that they needed to link the front and rear landing gears and a landing feature - via a hollow payload bay.

Madge went on to say that the shuttle is a "new expression of how we do space things," drawing on past Lego collections that included high-fidelity replicas of the Saturn V moon rocket, the International Space Station, and the Apollo 11 lunar module. He said of the new space shuttle, "To go to this size to target this adult market gives you a sense of the grandeur and the technological detail."

Like any previous space packages, the space shuttle package commemorates a significant milestone; April 12, 2021, will be the 40th anniversary of STS-1's launch, the first crewed mission of the space shuttle program's 135 flights.

What's Inside the Lego Discovery Shuttle?

Both Hubble and the space shuttle are included in the 2,354-piece package. It contains features such as openable cargo bay doors, working landing gear, and reflective stickers that imitate the cooling radiators used on the actual space shuttle.

The entire collection spans approximately 8.5 inches by 14 inches by 22 inches (22 cm by 35 cm by 56 cm). It contains two stands and plaques for the orbiter and Hubble.

CNN said Lego sought the assistance of NASA astronaut Kathy Sullivan, who was part of the STS-31 crew that launched the Hubble Telescope on April 25, 1990.

Lego shot an exclusive interview with Sullivan in which she discussed her space experience and demonstrated a finished Lego model.

"I was thrilled to see the space shuttle in Lego form ... Hubble is definitely the highlight of my career," Sullivan said in the news release.

In contrast to many other space shuttle packages made for children in previous decades, this collection is aimed at adults.

Sullivan didn't play with Legos as a child, but she did with erector sets. She claims that the complexities of bringing things together correctly - and though you make an error during construction - extend to real-life space missions as well.

Starting April 1, the Lego Space Shuttle Discovery pack will be available in Lego shops and on Lego.com. Lego also launched a version of the Ulysses space probe and is also available to Lego VIP participants. Ulysses is available in a limited quantity and will cost 1,800 VIP points.

RELATED ARTICLE: International Space Station Can Be Visibly Seen Soon: Here's How and When to Spot It!