Solar System Is Expecting a Visitor From the Oort Cloud Soon; Could It Be Among the Largest Comets Yet?

A huge object will make its closest approach to the Sun, swinging past Saturn's orbit and possibly transforming into a gigantic comet. Astronomers are already anticipating a possible "fireworks" spectacle.

The mysterious object is 2014 UN271 — also known as Bernardinelli-Bernstein. It is currently 22 AU from the Sun (where 1 AU is the distance between Earth and the Sun), indicating that it has already past Neptune's orbit.

Slash Gear said Pedro Bernardinelli and Gary Bernstein of the University of Pennsylvania discovered the object traveling inward from the Oort Cloud, probably from a distance of half a light-year. 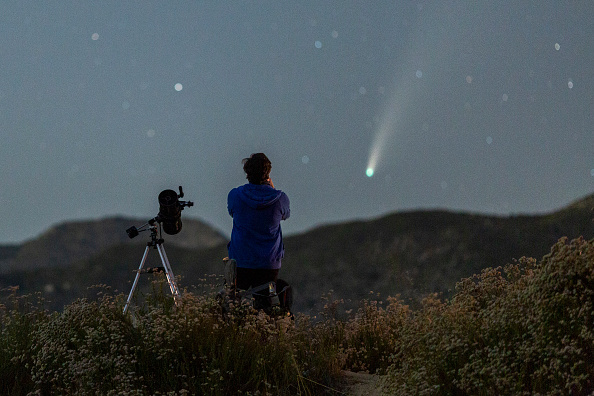 The Minor Planet Center of the International Astronomical Union announced the discovery on June 19. Before reaching its perihelion point (closest approach to the Sun) in 2031, Bernardinelli-Bernstein (2014 UN271) will continue its long trip back to the Oort cloud, covering another 11.1 AU.

How Did Bernardinelli and Bernstein Detect The Comet?

Digital Trends said Bernardinelli and Bernstein saw the comet while looking through six years' worth of day from the Dark Energy Survey, an international collaboration to map the universe's expansion.

Some people asked why it was only announced now: finding TNOs with DES is a massive computational problem (my PhD was solving this problem). The search itself took 15~20 million CPU-hours, and the catalog production from our 80,000 exposures probably took more than that!

The object was discovered at a distance of 29 AU from the Sun when it was first discovered, and it has traveled 7 AU in the last seven years. Although the actual period is unknown, several astronomers on Twitter said it travels in a very distant orbit, with estimates ranging from 400,000 to 1 million years.

"We have the privilege of having discovered perhaps the largest comet ever seen — or at least larger than any well-studied one — and caught it early enough for people to watch it evolve as it approaches and warms up," Bernstein said in a NoirLab statement. "It has not visited the Solar System in more than 3 million years."

Scientists Assure There's Nothing People Should Worry About This Visit

There is no certainty that 2014 UN271 will become a comet in ten years. Comets are celestial bodies that create a coma and a tail as they approach the Sun, resulting from sublimating ice (when solids change straight into gas).

If it becomes a comet, this object might be a virgin comet. That means one that is experiencing its first flare-up during a near approach to the Sun. Comet sightings of immaculate comets are quite rare.

Samantha Lawler, an astronomer at the University of Regina in Saskatchewan, Canada, told Gizmodo that the comet could be heated to temperatures substantially higher than those encountered in the last million years. This may result in outgassing or thermal strains, causing it to shatter and splinter into small pieces. However, she added that it may also accomplish "absolutely nothing" and remain a "sturdy, unaltered ball of ice and rock."

If 2014 UN271 becomes a comet, it will most likely be invisible to the naked eye or binoculars. However, with a magnitude of 16 to 17, it will almost probably be visible through telescopes.