The preliminary results of a study from the UK suggest that mixing different brands of COVID-19 vaccines could provide a better immunity against the virus. Volunteers in the trial produced high levels of antibodies and immune cells after getting one dose of the Pfizer-BioNTech COVID-19 vaccine and one dose of AstraZeneca-Oxford.

Dr. Mathew Snape of the University of Oxford said that administering the two vaccines in either order is likely to provide potent protection, The Mercury News reported. 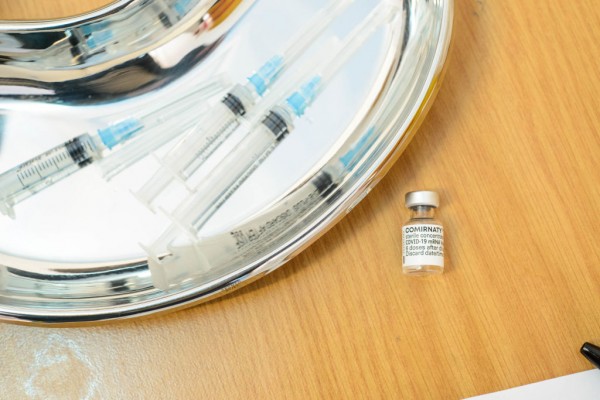 (Photo: Getty Images)
Mixing the Pfizer vaccine at the Cape Peninsula University of Technology (CPUT) on June 09, 2021, in Cape Town, South Africa. It is reported that the university has become the country's first tertiary institution to open a vaccination center for staff and students. (Photo by ER Lombard/Gallo Images via Getty Images)

Dr. Snape and his colleagues began the trials for mixing COVID-19 vaccines, called Com-COV, in February, in which they gave 830 volunteers one of four combinations of vaccines. Some volunteers were administered with two doses of Pfizer or AstraZeneca vaccines, while some also received both brands, wherein others received AstraZeneca first then followed by Pfizer and vice versa.

The news outlet reported that researchers waited for four weeks between doses for the first wave. But seeing that the Astrazeneca vaccine provided stronger protection if the second dose is delayed, the team decided to run a separate trial wherein the doses are administered 12 weeks apart.

Some volunteers reported having more chills, headaches, and muscle pain compared to volunteers who received two doses of the same vaccine. However, the researchers that it soon disappeared.

According to Dr. Snape, the differences between the four groups would most likely narrow if volunteers got the second dose of vaccine after 12 weeks when AstraZeneca had more time to strengthen its effects.

"This longer interval is known to result in a better immune response," Dr. Snape said as quoted by the BBC News.

VID-19 Vaccines Launched in the UK

People Immunized with mRNA Vaccines May Not Need Boosters.

In another study, the findings showed that most people who received the mRNA vaccines ned not any boosters as long as the virus and its variants do not evolve much beyond the current forms, although this is not guaranteed. Also, people who recovered from COVID-19 before receiving the vaccines ay not need boosters even if the virus evolves.

"It's a good sign for how durable our immunity is from this vaccine," said immunologist Ali Ellebedy, the lead author of the study "SARS-CoV-2 mRNA vaccines induce persistent human germinal center responses" published in Nature on June 28. The study only considered mRNA vaccines and not the vaccine made by Johnson & Johnson.

It also hinted that those who received two jabs of AstraZeneca could have stronger immunity if they receive a booster this autumn. But the UK's deputy chief medical officer, Professor Jonathan Van-Tam said that there is no reason to change the current successful same dose vaccine schedules in the country. Although this might change in the future depending on the circumstances.

Check out more news and information on COVID-19 Vaccines in Science Times.