Amazon Saw 19% Increase in Carbon Footprint During Pandemic, Explains Why It's Not That Bad

At a time when everyone stayed home due to the coronavirus pandemic, retail giant Amazon worked overtime to meet the sudden spike in delivery needs - resulting in a 19 percent increase in its carbon footprint.

Amazon explained in a new statement that while its carbon footprint for the past year was in response to the increase in customer demand during the coronavirus pandemic, the company still made "significant progress" in reducing its greenhouse emissions from business activities. This progress is credited to their investments in decarbonization plans. 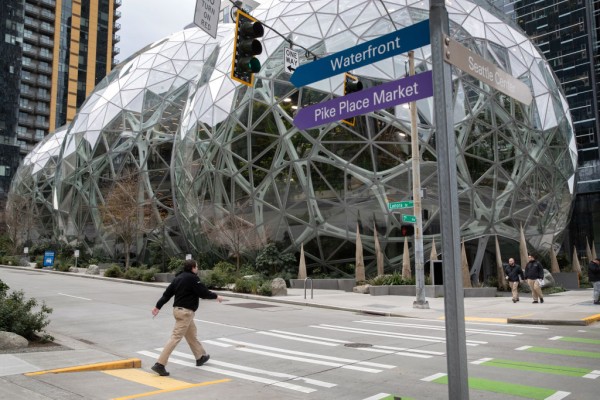 (Photo: Photo by John Moore/Getty Images)
SEATTLE, WASHINGTON - MARCH 10: The Amazon headquarters sits virtually empty on March 10, 2020, in downtown Seattle, Washington. In response to the coronavirus outbreak, Amazon recommended that all employees in its Seattle office work from home, leaving much of downtown nearly void of people. The Amazon Spheres conservatory, located on the Amazon campus, serves as an employee lounge and workspace.

Environmental Setback of a Growing Business

In its report, Amazon disclosed that its total carbon footprint for 2020 is about 60.64 million metric tons of carbon dioxide last year, compared to 51.17 million metric tons in 2019. The 2020 emission alone is equivalent to burning 140 million barrels, or more than 22 billion liters, of oil.

While their carbon emissions increased by 19 percent over the last year, Amazon notes that their overall carbon intensity dropped by 16 percent compared to 2019. This translates to 102.7 grams of carbon dioxide equivalent (CO2E) for every dollar of gross merchandise sales (GMS), compared to last year's 122.8 grams of CO2E per dollar of GMS.

Guided by the Science Based Targets Initiative (SBTi), an environmental think-tank that helps companies set realistic and attainable carbon footprint reduction goals, the Seattle-based retail giant says that it will publish its own science-based targets in 2022 after the process that began when Amazon joined last May 2020.

The Amazon Efforts to Cut Back on Its Carbon Footprint

In justifying its latest carbon footprint result, the multinational tech leader enumerates its efforts to cut down on its emissions - which include energy consumption from its stores, warehouses, data centers, and offices; the fuel and energy consumption from the transportation involved in its operations; even the materials and processes involved in its packaging materials. Amazon has been investing in sustainable energy sources. using recycled materials in the production of its gadgets and packaging. Also in the previous year, it bought the rights to the Seattle Stadium and renamed it the Climate Pledge Arena.

Also in the same report, Amazon told its patrons how shopping online is better for the environment compared to shopping in-store. A single Amazon delivery van making the rounds is approximately equivalent to 100 cars making a roundtrip to and from the store. Citing a comparative model developed by company researchers, the retail giant said that online shopping, on average, generates up to 43 percent fewer carbon emissions per item compared to physically going to stores.

Lastly, the report is a part of an ongoing Amazon response that began in 2018, when it first disclosed its carbon footprint and ending years of its supposed silence and secrecy with regard to its environmental impact. In 2019, Amazon announced its Delivering Shipment Zero plan that aims to drive net carbon emissions from at least 50 percent of its shipments down to zero by 2030.

Check out more news and information on Carbon Footprint in Science Times.