Did Scientists Just See A Black Hole Swallowing a Neutron Star for the 1st Time?

Nothing, not even light, can escape the gravitational pull of black holes. Now, astronomers have discovered black holes devouring the remains of big stars on two independent occasions for the first time.

The two cosmic monsters lurking at the centers of two galaxies devoured their cosmic neighbors, the neutron stars. The collapsed core of huge supergiant stars is known as a neutron star. Both the volatile events that occurred as these massive celestial beings collided triggered ripples throughout the universe, some of which were felt by our planet as well. Gravitational waves are the ripples in the space-time fabric that result.

This is the first time astronomers have observed black holes colliding with their neutron stars, remnants of stars 10 to 30 times more massive than our Sun. 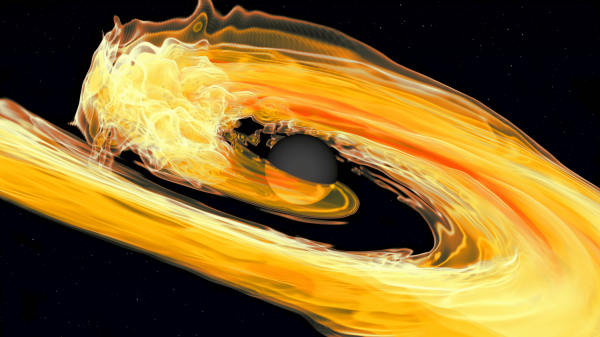 Chase Kimball, a Northwestern graduate student who co-authored the study, said per NBC that this is the first time a black hole and neutron star have collided. According to Kimball, the researchers have suspected these existed for a long time. But she said this is the first direct evidence, which would aid future astrophysical models of star populations in our universe and how their remnants interact with one another.

"Gravitational waves have allowed us to detect collisions of pairs of black holes and pairs of neutron stars, but the mixed collision of a black hole with a neutron star has been the elusive missing piece of the family picture of compact object mergers," Kimball said per Science Daily.

The researchers established that the gravitational waves that impacted Earth were caused by two distinct events. The detectors used in the investigation were the Laser Interferometer Gravitational-Wave Observatory (LIGO) in the United States and Virgo in Italy.

The first wave, GW200105, was created when a black hole with a mass of 9 solar masses collided with a neutron star with a mass of 1.9 solar masses. The distance from Earth to this cataclysmic cosmic explosion is estimated to be around 900 million light-years. The waves spanned 17% of the sky, which is the equivalent of 34,000 full moons.

The second wave (GW200115) was caused by a massive merger between a black hole with at least 6-solar mass and a companion neutron star with almost 1.5-solar mass, located roughly 1 billion light-years from Earth. According to the study, waves were monitored from a region of sky similar to the total area of 2,900 full moons.

According to the researchers, this is the first conclusive finding that can aid in decoding the frequency of such massive collisions in the cosmos. The scientists also calculated that at least one such enormous merger occurs every month. It occurs within one billion light-years of Earth.

The research could potentially reveal how collisions like the one between a black hole and a neutron star affect the growth and contraction of space-time fabric. The research was carried out by an international team of astrophysicists, including Northwestern University.

Where Do They Come From?

The researchers can now estimate how often such occurrences occur in the universe since the two events are the first confirmed observations of gravitational waves from black holes merging with neutron stars. Although not all instances are detected, the researchers estimate that one such merger occurs per month within a billion light-years.

The detectors are presently being prepared for a fourth observation cycle, which will begin in summer 2022.