The Perseverance rover from NASA is picking up speed on Mars due to technology that helps the robot avoid getting into danger on its extraterrestrial travels.

This technology, known as AutoNav, is a navigation system that scans topography and plots routes without requiring the rover to rely on Earth for guidance. Perseverance will take more direct routes and travel faster than NASA's previous Mars rover, Curiosity, thanks to AutoNav, four to five times more powerful than equivalent technology tested on Curiosity. This means Perseverance will be able to do more science in the same amount of time.

"We're going to be able to get to places the scientists want to go much more quickly," Jennifer Trosper, project manager for the rover at NASA's Jet Propulsion Laboratory (JPL) in California, said in a NASA statement. "Now we [can] drive through these more complex terrains instead of going around them: It's not something we've been able to do before." 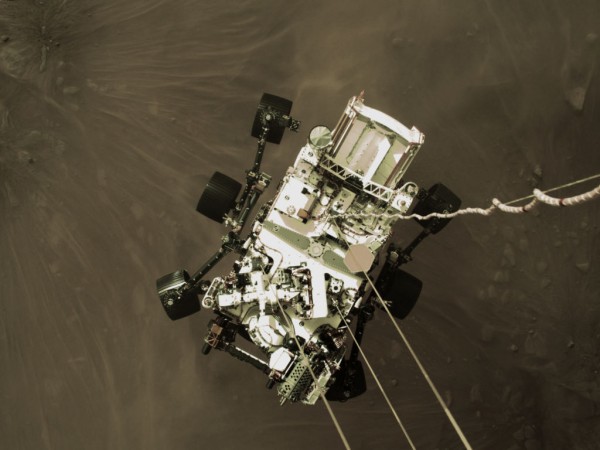 (Photo: NASA via Getty Images)
JEZERO CRATER, MARS - FEBRUARY 18: In this handout image provided by NASA, still image is part of a video taken by several cameras aboard the descent stage as NASA’s Perseverance rover as it touched down in the area known as Jezero crater on February 18, 2021, on the planet Mars.

Perseverance Rover Drives to Its Own Destination

NASA's small white rover has begun autonomous driving using the agency's newly upgraded AutoNav technology. The technology allows the rover to travel around Mars on its own, eliminating the need for human drivers thousands of miles away.

When compared to its predecessor, the AutoNav has powerful techniques, according to NASA. Among the features are creating 3D models of the terrain where the rover will travel; identify potential risks, and plan paths around them.

This allows the Perseverance to drive more effectively and at higher speeds because it now drives itself.

As it travels across the Martian landscape, the rover is constantly considering its next move. Perseverance's highest speed is claimed to be 393 feet (120 meters per hour), which is six times faster than Curiosity's top speed of 66 feet per hour.

According to Business Insider, NASA has considerably improved Perseverance's performance and capabilities compared to Curiosity.

Michael McHenry, the mobility domain lead and a member of JPL's rover planners, said the AutoNav enhances the speed by "four or five times."

The space agency also mentioned that the Perseverance rover usually travels a lot farther in a lot less time than Curiosity demonstrated.

AutoNav is a significant capability that will allow the wheeled rover to perform its mission on the Jezero Crater's floor. The goal is to examine and drill Martian soil to see any evidence of ancient, microscopic life.

The Perseverance now allows researchers to bypass challenging terrains rather than travelling around them, which its predecessor was unable to achieve. The AutoNav technology, on the other hand, does not completely eliminate human intervention. Rather, it simply boosts the rover's autonomy.

Suppose any issues occur as a result of the rover's autonomy; human drivers will be expected to take complete control to ensure that the equipment is safe.

Space.com said the six-wheeled robot's science campaign on the floor of Jezero Crater would be made possible, thanks to AutoNav. This entails sifting through Martian dirt and drilling for indications of ancient, microscopic life.

The AutoNav technology does not completely eliminate the necessity for human drivers; it simply increases the rover's autonomy when it is possible.

Team members expressed excitement at the prospect of allowing AutoNav to "drive." They will, however, be ready to interfere if the situation warrants it.