An investigation of clays found in one of Mars' craters claimed that parts of Mars might have been habitable for thousands or possibly a million years, which could only have formed in a stable life-friendly environment.

The Curiosity rover, currently investigating Gale Crater on Mars, used its onboard drill to sample the Martian surface in 2016. Using the rover's onboard instruments and X-rays, scientists discovered the existence of a clay mineral similar to so-called glauconitic clays, which indicate a period of habitability in the crater's history.

While it was previously thought that the site held an ancient lake for up to 10 million years around 3.5 billion years ago, when the planet's atmosphere was thicker and capable of supporting liquid water on its surface, it was unclear whether this lake would have had suitable conditions for life, such as a moderate temperature and neutral acidity. 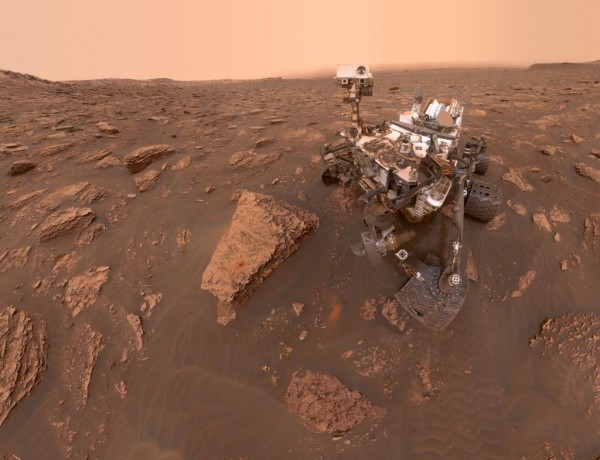 (Photo: NASA/JPL-CALTECH/MSSS / HANDOUT/Anadolu Agency/Getty Images)
MOUNT SHARP, MARS - JUNE 20: A self-portrait of NASA's Curiosity Mars rover shows the robot at a drilled sample site called "Duluth" on the lower slopes of Mount Sharp in Mars on June 20, 2018. A Martian dust storm reduced sunlight and visibility in Gale Crater. The north-northeast wall and rim of the crater lie beyond the rover, their visibility obscured by atmospheric dust.

Elisabeth Losa-Adams at the University of Vigo, Spain, the study's lead author, and her colleagues said per Daily Mail that glauconitic clays suggest the presence of liquid water that has been present for a long time under steady-state circumstances.

The composition of the water in the Gale crater lake was investigated using geochemical modeling to see if it was consistent with the creation of glauconitic clay on Earth.

Researchers claim some sediments had to have been accumulated in a quiet body of water over a long time. As a result, the lake in Gale Crater was not a short-term body of water but instead provided life-friendly circumstances for a much longer length of time — possibly up to ten million years. The water there has not frozen to ice or evaporated too quickly, indicating that the temperatures were adequate for the emergence of life at this time.

Mineral Clays on Mars a Good Sign, But Here's the Catch

The existence of mineral residues of glauconitic clays, on the other hand, is a favorable sign. Moreover, their presence on Mars shows that stable circumstances — with temperatures ranging from -3 to 15 degrees Celsius and water with a neutral pH — may have prevailed for up to a million years on Mars in Gale Crater.

"Glauconitic clays can be used as 'a proxy' for stable conditions," Losa-Adams told New Scientist.

These glauconitic clays indicate habitability at the period, but they are not proof of life. Another NASA Mars rover, Perseverance, is now exploring Jezero Crater, intending to find similar evidence. Curiosity's discoveries in Gale Crater are a hopeful hint that Perseverance will be rewarded.

"The existence of glauconitic clays could provide a new understanding of the evolution of the ancient Gale Crater lake," Losa-Adams says.