Scientists have discovered evidence of a massive cloud in space clustered between two galaxies. The cloud - which is made up of hot, glowing, and charged gases — has stayed unchanged for hundreds of millions of years.

The cloud may have been ejected out of one of the cluster's galaxies, according to scientists. The fact that the cloud has remained intact rather than dissolving over the years has surprised observers.

This information could help scientists better comprehend galaxy clusters and their properties.

Experts published their study titled "An H α/X-Ray orphan cloud as a signpost of intracluster medium clumping" at the Monthly Notices of the Royal Astronomical Society. 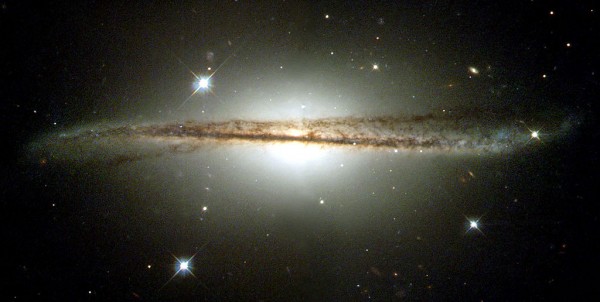 (Photo: NASA via Getty Images)
392767 01: (UPDATED PHOTO) A Hubble telescope edge-on view of the ESO 510-G13 galaxy is seen in this undated NASA photograph. The image shows the galaxy's warped dusty disk and shows how colliding galaxies spawn the formation of new generations of stars. The dust and spiral arms of normal spiral galaxies, like our own Milky Way, appear flat when viewed edge-on. This galaxy, by contrast, has an unusual twisted disk structure.

Ming Sun, a physicist at the University of Alabama in Huntsville (UAH), says this is both interesting and surprising. Sun, who headed the team, claimed that the giant cloud in the region is known as "no-man's land" for galaxies. "The cloud is not associated with any galaxy and is in a 'no-galaxy's land," Sun was quoted on the University of Alabama in Huntsville as saying.

The Leo Cluster, often known as the "orphan cloud," was discovered in Abell 1367. A1367, which is 300 million light-years from Earth, is home to 70 galaxies. The cloud was discovered using European Space Agency technologies (ESA). Europe's flagship X-ray telescope is the X-ray Multi-Mirror Mission (XMM-Newton).

Clouds May Separate Through Ram Pressure

"The cloud was discovered in a cluster of galaxies where millions of galaxies are locked together by hot gases with temperatures as high as 100,000,000 degrees Kelvin", Ming Sun said.

When the host galaxy is soaring at 1,000-2,000 kilometers per second through the hot gas in the cluster, the gas in the cloud is expelled by ram pressure.

The Earth's orbital speed around the Sun, by comparison, is about 30 kilometers per second, or 67,000 miles per hour.

That level of force is most likely what has kept the cloud's temperature constant and ripped it from its galaxy.

Ming Sun explained per Daily Mail that it is similar to when your hair and clothes fly backward when you are running forward against a strong headwind.

The cloud is initially frigid after being detached from the host galaxy and is evaporating in the intracluster host medium, much like ice melting in the summer.

Temperature and Velocity Matters For Clouds

The scientists concluded that the cloud came from a galaxy based on its temperature and velocity. It is unusual for a cloud to last thousands of millions of years without the help of a galaxy. The magnetic field of the cloud, according to scientists, is holding it together.

"This is an exciting and also a surprising discovery. It demonstrates that new surprises are always out there in astronomy, as the oldest of the natural sciences," Ming Sun said per Republic World.

This may help astronomers figure out why some orphan clouds survive after being ejected from a galaxy. Additional research is needed to determine why this cloud and others like it could provide new information about interstellar media, including how turbulent they become and how they transport heat.

RELATED ARTICLE: Venus Clouds 'Too Dry' to Support Life; What About Jupiter?