Largest X-Class Solar Flare: Why It is Impossible for "Killer Solar Flare" to Destroy Earth

Our Sun erupted in a spectacular solar flare, the largest in four years, on Jul. 3. But do not blame the solar flares if the world ends, NASA said.

According to the space agency, our star could not produce a solar flare large enough to burn our planet to a crisp, despite what some doomsayers claim.

"The explosive heat of a solar flare can't make it all the way to our globe, but electromagnetic radiation and energetic particles certainly can," the space agency said on its website. 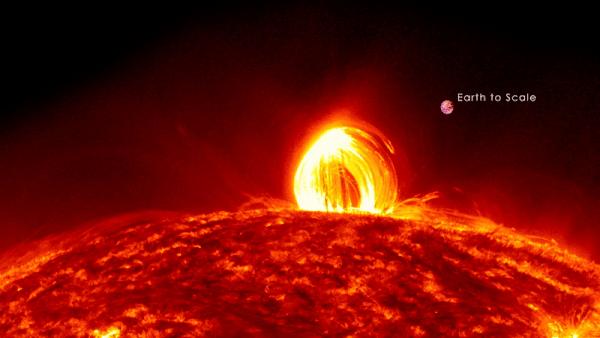 (Photo : Credits: NASA's Solar Dynamics Observatory/Scientific Visualization Studio/Tom Bridgman, Lead Animator)
Coronal rain, like that shown in this movie from NASA's SDO in 2012, is sometimes observed after solar eruptions, when the intense heating associated with a solar flare abruptly cuts off after the eruption and the remaining plasma cools and falls back to the solar surface.

The US Space Weather Prediction Center has classed the solar flare as an X1-class sun event because it originated from a sunspot designated AR2838 (SWPC). This indicates that the flare was the brightest and largest of its sort, large enough to produce a momentary radio blackout on Earth. The Atlantic Ocean's coastal villages were among those affected.

According to The National News, a solar flare is an ejection from the Sun that contains X-rays and electromagnetic radiation and usually propells into space at the speed of light. The Sun accumulates magnetic energy in its "solar atmosphere" over time, which is occasionally released in what seems to the inexperienced eye as an explosion.

It is an understatement to say that a solar flare is massive. And there is no other boom like it elsewhere on Earth during the Fourth of July celebrations, which is a little ironic.

Of course, the Sun's rumblings have an impact on our globe. Flares, for example, can impair satellite communications by briefly altering Earth's upper atmosphere.

Even more dangerous are coronal mass ejections (CMEs), which are massive explosions of solar plasma that flash into space at speeds of 3 million mph (5 million kph) or more. CMEs can disrupt GPS signals, radio communications, and electrical systems when they strike the Earth.

As a result, a powerful, well-targeted CME might wreak havoc on our increasingly tech-enabled and tech-reliant civilization. However, Space.com claims that it would not destroy the Earth or wipe off humanity.

How Big Can Solar Flare Erruptions Get?

Given that the Sun is the greatest object in the Solar System, even the smallest solar flare dwarfs a planet like the Earth. According to a HyperPhysics report, a basic flare (also known as a solar prominence) can have a diameter of 100,000 km, which is nearly 10 times the diameter of Earth. And it is nothing compared to the X1-class flare that erupted just before Independence Day.

However, supermassive objects are not uncommon in the cosmos. Take, for example, Proxima Centauri, the solar system's nearest star. It produced a massive solar flare earlier this year that was 100 times more powerful than anything we have ever seen here on Earth. Our own Sun's explosion on July 3 was 100 times more intense. Allow that to sink in.

The Proxima Centauri flare was large enough for astronomers to believe that life (even simple, long-lived life forms like tardigrades) could not survive on any of its planets. It is safe to say that we Earthlings are fortunate that the Sun only throws out a fraction of that energy. Furthermore, while solar flares occur multiple times per day, only a small percentage of them make it to Earth.

For the time being, the world should be pleased with the fact that even large solar flares can merely impede radio communications. However, this is not "safe" in the sense that companies that rely on radio (particularly maritime) could be badly harmed if they are in the middle of the ocean. However, if you do not listen to the radio very often in your regular life, you would not be in too much difficulty.