Is European Robotic Arm Ready for Space? Astronomers Explain How This Feature Works

The European Robotic Arm (ERA) of the European Space Agency (ESA) has been mounted on the Russian Multipurpose Laboratory Module (MLM), and it is now ready for its voyage to the International Space Station (ISS).

ERA and its two control stations will launch aboard a Proton rocket from Kazakhstan's Baikonur Cosmodrome with this module, dubbed "Nauka."

The European Robotic Arm will arrive at the International Space Station after a one-week journey, where it will service the Russian component of the space station. 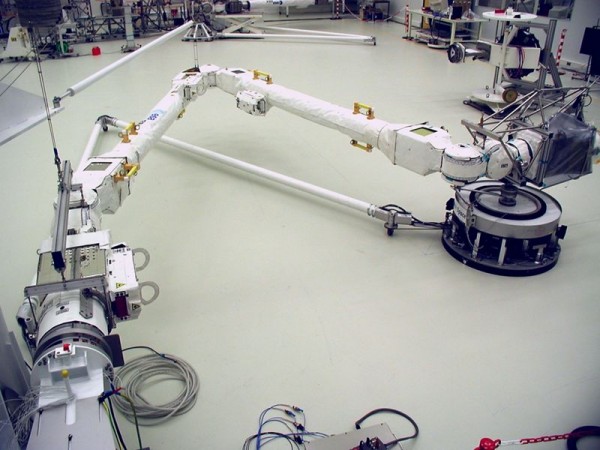 (Photo: Airbus)
Airbus space engineers have installed ESA’s European Robotic Arm (ERA) onto the Russian Multipurpose Laboratory Module (MLM), and it is now ready for its flight to the International Space Station (ISS). Together with this module, known as ‘Nauka,’ ERA and its two control stations will launch from the Baikonur Cosmodrome, in Kazakhstan, on a Proton rocket.

Space.com said the European Robotic Arm (ERA), manufactured by Airbus for the European Space Agency (ESA), will launch to the orbiting outpost with the new Russian Multipurpose Laboratory Module.

The robot has two symmetrical arms around 16 feet (5 meters) long and resembles a pair of compasses. ESA stated in a statement that ERA, which is equipped with a dexterous hand at the end of each arm, would be able to travel freely outside of the space station, attaching itself wherever it is needed.

The arm, which weighs only 1,390 lbs. (630 kg) and is made of lightweight aluminum and carbon fiber, will be able to move and install components weighing up to 17,600 lbs. (8,000 kg) while reaching targets with a precision of 5 millimeters. However, it might also be used to transport astronauts and cosmonauts from one working site to another during spacewalks.

From within or outside the ISS, astronauts and cosmonauts can control the European Robotic Arm in real-time or pre-program it to move payloads, investigate the space station with its infrared cameras, and support operations outside the ISS.

New Two-Handed Robotic Arm: What Are Its Features?

Australian Defense said the robot supplies electrical power, a data bus, a video line, and a rotating drive machine from its tip. ERA can be equipped for one of the many jobs it can execute automatically or semi-automatically by connecting a tool to the tip.

According to Airbus, ERA has a lightweight construction but can move very big quantities due to zero-gravity conditions in space: from 3,000 kg to 8,000 kg in slow modus. The robot arm is said to have a precision of 5 millimeters.

A European partnership led by Airbus Defence and Space in the Netherlands developed ERA for the European Space Agency (ESA). Airbus created the arm and its software functions, oversaw subsystem development across Europe, and integrated and tested the system. Airbus, in collaboration with ESA and Russian partners RSC/Energia, has just implemented ERA on the MLM.

"The long awaited launch of the European Robotic Arm to the International Space Station marks a huge contribution of the Netherlands to the continued operation of the ISS, which was enabled by the loyal support of the Netherlands Space Office and the Ministry of Economic Affairs and Climate Policy," Rob Postma, CEO of Airbus Defence and Space Netherlands, said in an Airbus statement. "In addition, it celebrates the effort, commitment and determination of the many space professionals involved throughout the years," Postma added.