Venus, Mars, Moon Conjunction: Will They 'Kiss' Before Parting This Week?

The planets of love and war, the "Evening Star" and the "Red Planet," are going to "meet" during dusk in one of the year's most exciting planet-gazing events.

Mars and Venus will appear to be only 0.5o apart from Earth on Tuesday, July 13, 2021. While the two planets on opposite sides of Earth's orbit will appear to be closest on that date, they will appear to be nearly as close a few nights before and after — with the added advantage of a super-slim crescent Moon in the sky!

This makes it a "triple conjunction," and it is one to keep an eye out for this weekend through Wednesday. Of course, the planets are millions of kilometres apart, so it is just a line-of-sight illusion, but they will appear to be near for a few nights. 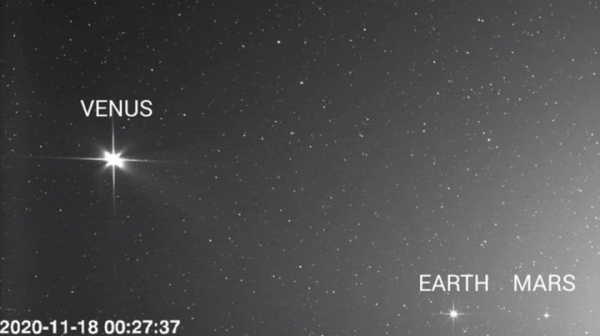 It is also the first of three Venus-Mars conjunctions in less than eight months, with similar views expected on February 12 and March 12, 2022. In two ways, it is a "triple conjunction."

Here is everything you need to know about seeing the conjunction of Mars, Venus, and the Moon-though you should double-check your location's planet-set times for a precise schedule:

[NOTE: The times and dates listed are for latitudes in the mid-northern hemisphere. Check out online planetariums such as Stellarium and The Sky Live for the most up-to-date location-specific information depending on where you are.]

Venus will be flanked by a dull Mars and a 3.4 percent-lit crescent Moon, which is about as thin as our satellite. Inforum said skygazers can see it just after sunset on Sunday, July 11, 2021, on the west-northwest sky.

Mars and Venus Closest Together On First Try

Venus and Mars will be at their closest shortly after daybreak in North America on July 13, Forbes said. Thus the best chances to see them together will be on July 12 or 13, immediately before and after the major event.

On July 12, an 8.4 percent-lit waxing crescent Moon will be seen barely 3o above the two planets. Mars will be located to the lower-left of Venus, roughly 0.5º away from the brighter planet.

Mars reaches its aphelion-the exact point in its slightly eccentric orbit where it is furthest from the Sun-by luck anytime this week on west-northwest sky.

Mars and Venus Closest Together On Second Try

The planets will be around 0.5º apart again on July 13, this time with Mars below Venus — still on west —northwest sky.

Regulus, a bright star in the constellation Leo, is visible to the top left of the planets, with a 16 percent-lit crescent Moon beyond.

The conjunction has passed, and the now 25 percent-lit crescent Moon has moved away from the planetary pair. However, it's still worth going outside tonight. Venus will have passed Mars in the sky, with the latter visible to the planet's lower right on July 14.

How to See Mars, Venus and the Crescent Moon

Although you'll be able to view Venus and the Moon with your naked eye, seeing Mars will be more difficult. In reality, it will be 200 times less bright. While the Moon and Venus will be simple to detect, knowing where Mars is will help you get a good look at it. You may have to wait till the sky darkens before seeing Mars, or you can use binoculars. And just make sure you have an unobstructed view!

Good luck-this is a fantastic opportunity to see the Moon at its thinnest, Venus at its brightest and best, and Mars one more time as it sinks into the setting Sun.