There are a number of factors that affect the ecological balance of the oceans, and a new study offers insight into how atmospheric acidity also harms the waters and those living in them.

In a new study led by researchers from the University of East Anglia, the increasing atmospheric acidity - or the growing density of condensed materials like aerosol and fog droplets - affects how oceans absorb carbon dioxide (CO2) from the atmosphere and how the nutrient transport system moves the materials from the air to the waters.

The exploration between the atmospheric condition and the ecological balance in the world's oceans is presented in the article "Changing atmospheric acidity as a modulator of nutrient deposition and ocean biogeochemistry," published in the Science Advances journal. The new study is supported by the United Nations Group of Experts on the Scientific Aspects of Marine Environmental Protection (GESAMP), an independent scientific think-tank that offers advice to the United Nations on matters regarding the marine environment. 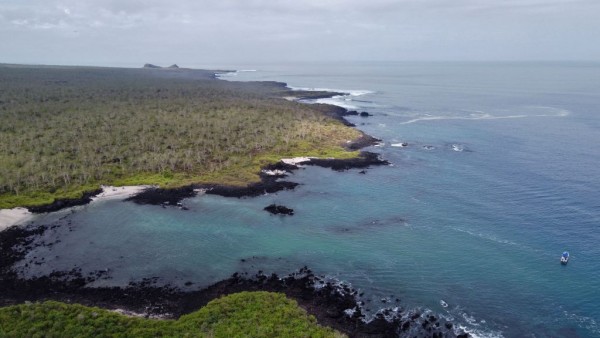 (Photo: Photo by RODRIGO BUENDIA/Afp/AFP via Getty Images)
Aerial view of Floreana Island in the Galapagos archipelago, Ecuador, on April 14, 2021. - Biologists are implementing monitoring programs with the aim of generating data to allow the protection of sea turtles, sharks, sea lions, corals, and iguanas, all the species that make Galapagos an exceptional site considered a natural heritage of humanity.

A Problem Since the Industrial Revolution

"Human emissions of pollutants have caused significant changes to the acidity of the atmosphere, leading to well-known environmental impacts such as acid rain," explains Alex Baker, lead author of the study and a professor of Marine and Atmospheric Chemistry from the School of Environmental Sciences at the University of East Anglia, in a university press release.

Baker additionally explains that acidic substances, for example, attack desert surfaces and are carried through the atmosphere. As it happens, the concentration of phosphorus and iron in these particles dissolves when the dust carrying them dissolves into the ocean.

In the new work, their findings suggest that the increasing atmospheric acidity, which has been on the rise since the Industrial Revolution of the 18th century, is characterized by a steady increase of about 14 percent in phosphorus and 16 percent in iron. These changes are expected to have a "direct fertilizing effect" on the phytoplankton in the ocean. A similar description of increasing chemicals in the atmosphere has been noted in a write-up from the NOAA website.

Also, in the same period covered in the study, researchers found that pollution is responsible for as much as two times the amount of nitrogen ending up in the oceans from the atmosphere.

An Ongoing Challenge for the Oceans

In the same UEA release, University of Crete professor and study co-author Maria Kanakidou explains that atmospheric acidity affects the nitrogen distribution and the length of time it spends in the air, and when and where it will land in the oceans. From the marine environment perspective, phytoplanktons are particularly sensitive to the nutrients available to them. Therefore, any changes to the nutrient transport system could lead to an ecological shift. It could most likely encourage the population growth of certain species while pushing others into decline.

Professor Athanasios Nenes from the Ecole Polytechnique Fédérale de Lausanne adds that human activities will continue to affect atmospheric acidity and the nutrition transport system leading into the oceans.

Check out more news and information on the Oceans in Science Times.