The oil left in the oceans from oil spills is photo oxidized and turned into more persistent compounds in a span of hours to days, much faster than extended periods of time as previously thought.

This was demonstrated in new research from the University of Miami (UM) Rosenstiel School of Marine and Atmospheric Science. Researchers demonstrated that oil drifting in oceans could be photo oxidized under realistic environmental conditions - where the oil is weathered and degraded to continuous exposure to sunlight and oxygen - into other carbon-based byproducts over time. This is also demonstrated to occur at rates much faster than scientists believed during the time of the 2010 Deepwater Horizon oil spill.

One example of this is tar - known usually as the black liquid used for asphalt roads - which is a product of this same degradation process. Furthermore, tar generated from photo oxidized oil in the ocean could remain deposited in coastal areas decades after an oil spill. 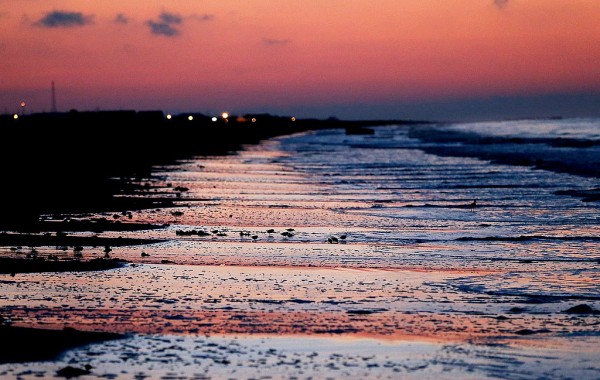 (Photo: Photo by Sean Gardner/Getty Images)
GRAND ISLE, LA - APRIL 19: Early morning waves crash along the beach, days after a BP announcement that it is ending its "active cleanup" on the Louisiana coast from the Deepwater Horizon oil spill on April 19, 2014, in Grand Isle, Louisiana. The Deepwater Horizon oil rig exploded on April 20, 2010, killing 11 workers and spilling millions of gallons of oil.

Researchers from the UM Rosenstiel School present their findings in a report title "A Coupled Lagrangian-Earth System Model for Predicting Oil Photooxidation," published in the journal Frontiers in Marine Science. To understand how sunlight degrades oil, they developed the first oil-spill model, which contains an algorithm tracking the amount of solar radiation present in oil droplets that rise from the deep sea up to the ocean surface.

The UM Rosenstiel School team later discovered that weathering of oil droplets due to sunlight occurred in a span of several hours to days. Furthermore, up to three-fourths of the photo oxidized oil in the Deepwater Horizon oil spill happened in approximately the same locations where chemical dispersants were sprayed from aircraft. Additionally, hydrocarbon products from this weathered oil are known to adversely affect aerial dispersants.

"Understanding the timing and location of this weathering process is highly consequential," stressed Clair Paris, senior author of the study and a faculty member at the UM Rosenstiel School, in a press release. She adds that this knowledge could help direct efforts and resources on fresh oil while also avoiding added environmental stress with chemical dispersants on oil spill locations where it is not as effective.

On the other hand, Ana Carolina Vaz, lead author of the study and assistant scientist at UM's Cooperative Institute for Marine and Atmospheric Studies, explains that photo oxidized compounds like tar stays longer in the environment, making photooxidation models "critically important" not just for first response actions during an oil spill, but also helps risk assessment before planned exploration efforts.

The industrial disaster now known as the Deepwater Horizon oil spill began on April 20, 2010, along the Gulf of Mexico, caused by the BP plc operated Macondo Prospect. It is considered the largest marine incident in the petroleum industry. The US federal government estimates the spill to be at 4.9 million barrels (210 million US gallons or about 780,000 cubic meters).

Shortly after the maritime incident, several international efforts attempted to prevent the further spread of the oil spill, with the well being declared sealed by September 19 - about five months after.

RELATED ARTICLE: Cannibalism, Mutations, and Tumors Are the 10 Year Effects of the Gulf Spill on Deep Sea Creatures

Check out more news and information on Oil Spills in Science Times.