Are COVID-19 Vaccines Mostly Graphene Oxide? Here's What Experts Have to Say

From their development to now that they're being deployed worldwide, COVID-19 vaccines still have to put up against smear campaigns and unsupported claims - the latest being that Pfizer and AstraZeneca vaccines contain graphene oxide.

A video interview between show host Stew Peters and Dr. Jane Ruby, introduced as a "20-year pharmaceutical researcher," made the rounds on the Internet last July 9. Their conversation revolves around how COVID-19 vaccines supposedly contain graphene oxide, with Dr. Jane Ruby saying that the fabricated nanomaterial draws and binds with biomolecules, increasing toxicity levels and posing harm to the individual. 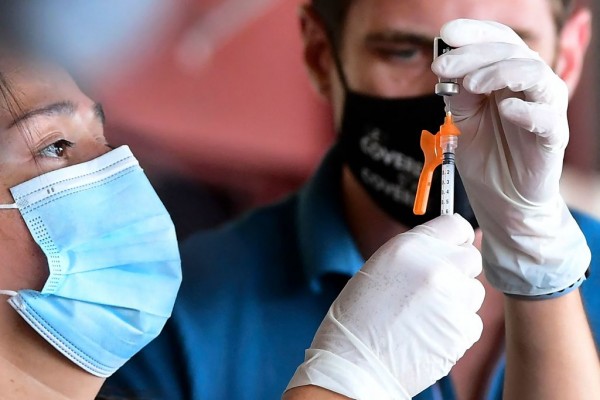 (Photo : Photo by FREDERIC J. BROWN/AFP via Getty Images)
The Pfizer Covid-19 vaccine is prepared for administion at a mobile clinic in an East Los Angeles neighborhood which has shown lower vaccination rates especially among the young on July 9, 2021 in Los Angeles, California. - Los Angeles County is seeing a surge in Covid-19 cases as the Delta variant spreads and brings rising alarm.

But what is Graphene Oxide?

Graphene oxide is a material formed by carbon, hydrogen, and oxygen in variable rations done by exposing the 2D material graphite with chemicals such as oxidizers and acids. A 2017 study published in the Carbon journal examined various samples from different laboratories, with each sample synthesized through varying methods. Graphene oxide generally retains the layer structure of its parent graphite.

As for the material being a health risk, a 2016 study in the Particle and Fibre Toxicology shows that graphene-base materials such as graphene oxide could cause dose-dependent toxicity, such as injuries to the liver and kidney, formation of lung granuloma, decreased cell viability, and cell apoptosis or pre-programmed cell death. In their in vivo studies, researchers report graphene oxide not causing "obvious toxicity" in mice exposed to low dose (0.1 mg) and middle dose (0.25 mg). However, there was chronic toxicity at higher doses (0.4 mg). It was found to be mainly deposited in the lungs, liver, spleen, and kidneys. Additionally, researchers report difficulty in cleansing the material out of the body.

However, the main concern is whether this material - which has also been used in a variety of industrial applications - is actually present in the COVID-19 vaccines, specifically those of Pfizer and AstraZeneca.

So, Is There or Is There Not?

In an earlier interview with Stew Peters, dated July 5, Dr. Jane Ruby discloses that researchers from the University of Almeria in Spain inspected vials of Pfizer vaccines and reported finding graphene oxide composing more than 99.9 percent of the material.

Additionally, the AP secured a response from the University of Almeria, which denied involvement in the supposed exposé. In its own statement, originally in Spanish, the University expressed support for COVID-19 vaccines and disavowed the results from the study of one of its professors. Also, the report, which is not yet peer-reviewed and not officially published, includes a disclaimer that the findings do not represent any institutional position for the University.

Bruce Y. Lee, Professor of Health Policy and Management at the City University of New York (CUNY) School of Public Health, writes in his July 10 column that "the word 'medical expert' is not something that you can just throw out there." He also links readers to Dr. Jane Ruby's website and calls into question Dr. Ruby's credentials.

Check out more news and information on COVID-19 Vaccines in Science Times.