Gypsy Moth, Gypsy Ant to be Renamed in Reverence to the Romani People

The scientific community has been moving toward a more inclusive and respectful direction as various organizations drop names that reinforce negative stereotypes against certain groups and minorities - and the insect kingdom has followed suit.

According to the Entomological Society of America (ESA) - the largest organization of insect experts in the world - it's time to drop the common names "gypsy moth" and "gypsy ant" because they are inappropriate and offensive for the Romani people. The changes to the two insect names mark the beginning of the organization's effort to "review, revise problematic insect common names" as a part of its Better Common Names Project. 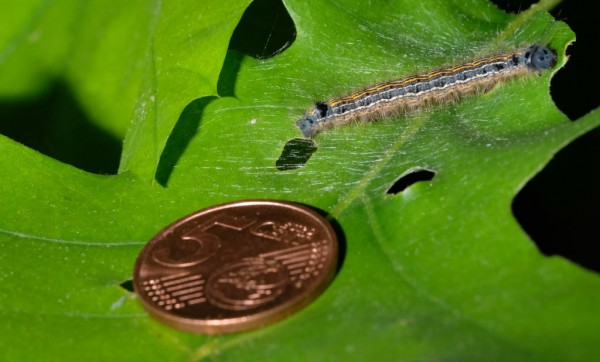 (Photo: Photo by Sebastian Willnow/picture alliance via Getty Images)
15 May 2020, Saxony, Markkleeberg: The still small caterpillar of the sponge moth on the leaf of red oak with a five-cent piece for size comparison. The caterpillars grow to 40 to 70 millimeters long and can eat the leaves of trees until they are completely defoliated.

In its official statement last July 7, the Entomological Society of America recognizes that common names are there to bridge the communication gap between science and the public. While ESA understands its success in this regard, they also recognize that there are still names in its catalog that are "unwelcoming to marginalized communities" and counteract that goal in effect.

The Romani people are Europe's largest ethnic minority and are traditionally an Indo-Aryan population group. While they are known in English as "gypsy" or "gipsy," the term has become a pejorative or an offensive term because of its negative connotations and its historical use as a racial slur against the Romani people. In a 2003 feature article from the University of Texas at Austin, university professor Ian Hancock explains why the name is wrong and derogatory.

In the ESA archive, "gypsy moth" is the common name for Lymantria dispar, an invasive species and a pest in US forests. Its common name has been used for early as 1908, if not earlier. The European moth species, according to the US Department of Agriculture, was first introduced to North America in 1869 and rapidly established itself as an invasive species. The Global Invasive Species Database also adds that its larva consumes the leaves of over 500 different species of trees, shrubs, and other plants - making it a pest to a wide variety of produce and plants.

Meanwhile, the ESA records show the common name "gypsy ant" being approved for use in 2006. Formally designated as the Aphaenogaster araneoides, the "gypsy ant" got its name as California State University Dominguez Hills biology professor Terry McGlynn claims responsibility for the name. He explains in a 2019 blog post how a friend suggested the name, which he proposed to the Entomological Society of America. McGlynn details his journey to work towards renaming the ant gypsy, including his realization and his experience meeting actual members of the Romani people.

Back then, the animal lacked a common name. McGlynn also published a 2010 report published in the Journal of Insect Science. In it, he described serial monodomy - where animals create several nests for themselves but only occupy one at a time - in the new ant species.

"Soon, I will be sending in a proposal to the common names committee to abolish the name currently used for A. araneoides," McGlynn wrote in his 2019 blog. Whether it was the same 2020 report that spurred the ESA renaming effort remains to be confirmed.

Check out more news and information on Entomology in Science Times.