NASA has announced that it will drop nicknames that are "insensitive" and "harmful" for space objects in a move to address systemic discrimination and inequality.

Aside from their official designations, celestial objects often receive an "unofficial nickname" from the scientific community. NASA released a statement announcing that it will examine its use of "unofficial terminology for cosmic objects as part of its commitment to diversity, equity, and inclusion."

"These nicknames and terms may have historical or culture connotations that are objectionable or unwelcoming, and NASA is strongly committed to addressing them," Stephen T. Shih said in the press release. Shih is the Associate Administrator for Diversity and Equal Opportunity at NASA Headquarters. 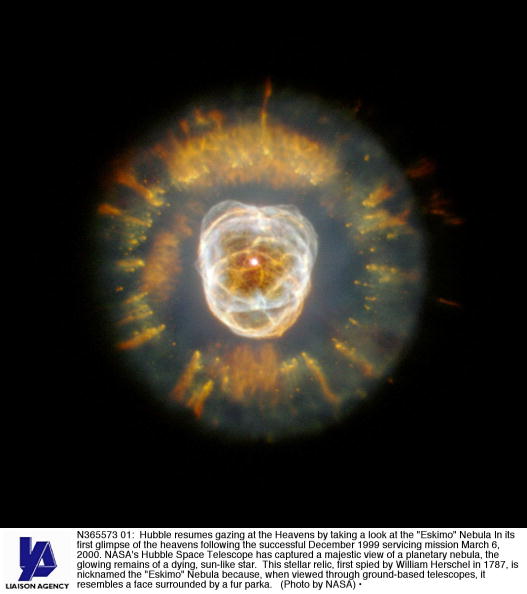 (Photo: Photo by NASA/Getty Images)
N365573 01: Hubble resumes gazing at the Heavens by taking a look at the "Eskimo" Nebula In its first glimpse of the heavens following the successful December 1999 servicing mission March 6, 2000.

No More Colonial and Racist Terms In NASA Documents

As the first step in the space agency's move against racism and inequality, it will no longer use the term "Eskimo Nebula" to refer to the planetary nebula NGC 2392. Also referred to as Caldwell 39 or the Clownface Nebula, NGC 2392 is a double-shell nebula that is actually the remains of a star burning off its outer layer. Its appearance has been likened to a human head surrounded by a parka hood, hence the nicknames.

However, the term "Eskimo" is widely regarded as a "colonial term with a racist history, imposed on the indigenous people of Arctic regions." NASA claims that most official documents regarding the double-shell planetary nebula have already moved away from the use of the term.

Another example of a soon-to-be-scrapped nickname is the "Siamese Twins Galaxy," unofficial nicknames for NGC 4567 and NGC 4568. Also known as the Butterfly Galaxies, the twin systems are a pair of unbarred spiral galaxies in the Virgo Galaxy Cluster, some 60 million light-years away from the Solar System.

In the press release, NASA said that it will only use the official designations from the International Astronomical Union in cases of inappropriate nicknames. There are a lot of other nicknames, described by the agency as being "more approachable and public friendly" compared to their official names. This includes "the Horsehead Nebula" for Barnard 33, the small dark nebula in the Orion constellation. Another example is the formation around the star Fomalhaut, whose debris disc around it led to the nickname "The Eye of Sauron," from J.R.R. Tolkien's "Lord of the Rings" series.

RELATED: The Eye of Sauron and Other Most Interesting Things Ever Found Across the Universe

Thomas Zurbuchen, associate administrator of NASA Space Mission Directorate at their Washington Headquarters, explained that they aim to have "all names are aligned with our values of diversity and inclusion, and we'll proactively work with the scientific community to help ensure that. Science is for everyone, and every facet of our work needs to reflect that value."

A Subject for Debate... and Ridicule?

While the move received praise, not everyone seems to be aboard the latest NASA announcement. Other people have seen the announcement as the space agency's attempt to pander to the "woke culture."

American psychologist Geoffrey Miller, known for his works on evolutionary psychology and sexual selection, also told off the space agency. "Your job, @NASA, is to explore space & understand the cosmos. Not to appease the woke cult through virtue signalling," Miller wrote.

As we work to identify & address systemic discrimination & inequality in all aspects of the scientific community, we are reexamining the use of unofficial terminology for cosmic objects which can be not only insensitive, but actively harmful. Read more: https://t.co/ZNicp5g0Wh pic.twitter.com/jDup6JOGBd — NASA (@NASA) August 5, 2020

Tim Young, writer and comedian, replied to the NASA announcement on Twitter. Young wrote: "Since Elon Musk is doing all the work actually sending things into space, I guess all you guys have left to do is waste taxpayer dollars on this bulls**t."

RELATED: NASA Offers up to $180,000 to University Students Who Can Help Solve the Lunar Dust Problem