NASA has released a stunning close-up image of the globular cluster NGC 6380 taken by the NASA/ESA Hubble Space Telescope.

They are remains of the initial epochs of galaxy formation and are among the oldest known objects in the Universe.

Around our Milky Way Galaxy, some 150-180 such clusters have been discovered. 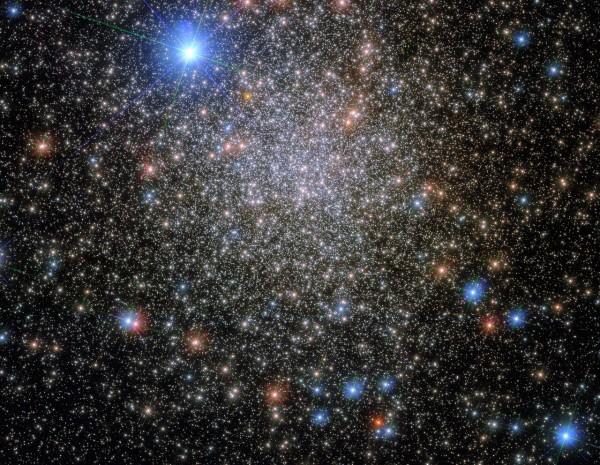 (Photo : ESA/Hubble & NASA, E. Noyola)
This image shows the globular cluster NGC 6380, which lies around 35 000 light-years from Earth, in the constellation Scorpio (The Scorpion).

NGC 6380 is one among them, and it's around 35,500 light-years away in the constellation Scorpio. Astronomy Now said James Dunlop, a Scottish astronomer, was the first to find the cluster in 1826.

SciTechDaily said this image depicts the globular cluster NGC 6380 in the constellation Scorpio. HD 159073, the brilliant star at the top of the photograph, is only around 4000 light-years away from Earth, making it a significantly closer neighbor than NGC 6380. This image was captured by Hubble's Broad Field Camera 3 (WFC3), which has a wide field of view, allowing it to image relatively huge portions of the sky in incredible detail.

NGC 6380 is not a particularly exciting name, but it indicates that this cluster is catalogued in the New General Catalogue (NGC), which was originally compiled in 1888, ESA said in a statement.

James Dunlop gave it an unflattering name of Dun 538. But eight years later, in 1834, British astronomer John Herschel independently rediscovered it, and he — similarly immodestly — named it H 3688.

The cluster was rediscovered in 1959 by the Armenian-Mexican astronomer Paris Pişmiş, who cataloged it as Tonantzintla 1 and also designated to it as Pişmiş 25 to continue the pattern.

In addition to its fascinating history of rediscovery, experts said per Sci News that NGC 6380 was supposed to be an open cluster until the 1950s.

The British astronomer A. David Thackeray was the one who realized it was a globular cluster.

This cluster is now securely recognized as a globular cluster in publicly known catalogues, and is simply referred to as NGC 6380.

Nearly all galaxies feature globular clusters, and more than 150 have been discovered in a roughly spherical halo surrounding the Milky Way.