The collision of gigantic celestial bodies always results in massive cosmic activities. Researchers at the National Aeronautics and Space Administration or NASA conducted a study regarding the effects of the recently observed collisions from two galaxy clusters using the Chandra X-ray Observatory. 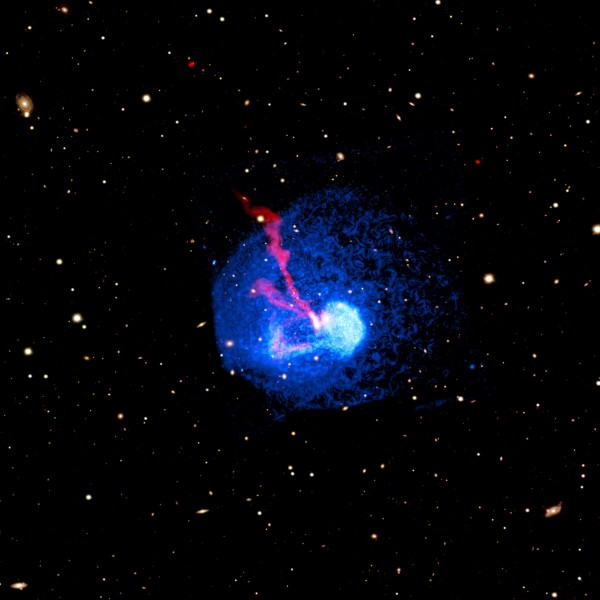 Galaxy clusters are a collection of various galaxies combined into one spatial location, held by gravity to maintain their position side-by-side. Imagine two or more Milky Way galaxies attached with one another, and you'll get a cluster. A galaxy cluster may comprise hundreds or even thousands of galaxies combined. The members of a galaxy cluster are subject to heat from vast levels of gas, which can be found in almost every material in a single galaxy.

Superheated gas is basically part of every celestial body in a galaxy system. Atoms form the overly hot gasses among the composition in bodies such as stars and planets, including Earth.

The formation of hot gas, sometimes called the natural matter, is normally found in all galactic materials, and in between galaxies, these gasses have a higher mass. This normal matter is usually locked in a galaxy cluster by the gravity of a different matter with a much greater mass, like dark matter.

When these masses are mixed with various planetary activities, the cluster of galaxies exhibits spontaneous collisions, which are among the largest energetic cosmic phenomena. In a new study published in the journal arXiv entitled "Nonthermal phenomena in the center of Abell 1775: An 800 kpc head-tail, revived fossil plasma and slingshot radio halo," experts have captured a recent cluster galaxy collision lightyears away from our planet.

ALSO READ: Chile Peppers in Space: Why Is NASA Growing Spices in the ISS? What Does It Mean for Astronauts?

Leiden University's astronomy expert Andrea Botteon, together with her team, has observed one of the most powerful collisions from a galaxy cluster known as the Abell 1775. This galaxy cluster, located almost 700 million lightyears away from our planet, was examined through NASA's Chandra X-ray Observatory, reports PhysOrg.

Galaxy clusters with various sizes display a much more active collision. The smaller cluster will exert effort to penetrate through the larger cluster with a greater gravitational pull brought by its superior mass. In this process, the smaller cluster is being stripped off of its hot gasses because of the massive friction. The friction leaves behind a trail of clusters, also called wakes to tails. As the collision takes place, the tail of the smaller cluster will seemingly give up and resist less with the mass of the larger cluster. When this happens, the tail overshoots to the center of the cluster and then curves away, causing a slingshot effect.

The slingshot from the Abell 1775 collision was captured by Chandra. The data from the observatory includes measurement of temperatures and X-ray of the tail. Previous separate studies imply that there was no ongoing collision activity in Abell 1775 galaxy cluster, but the recent study confirmed that there is indeed a collision at hand.

With that said, further studies will be conducted to predict Abell 1775's future activities. Two potential scenarios are expected to occur from the recent galaxy collision: either it will be the Leiden University's slingshot event or Shanghai Jao Tong University's sloshing theory.